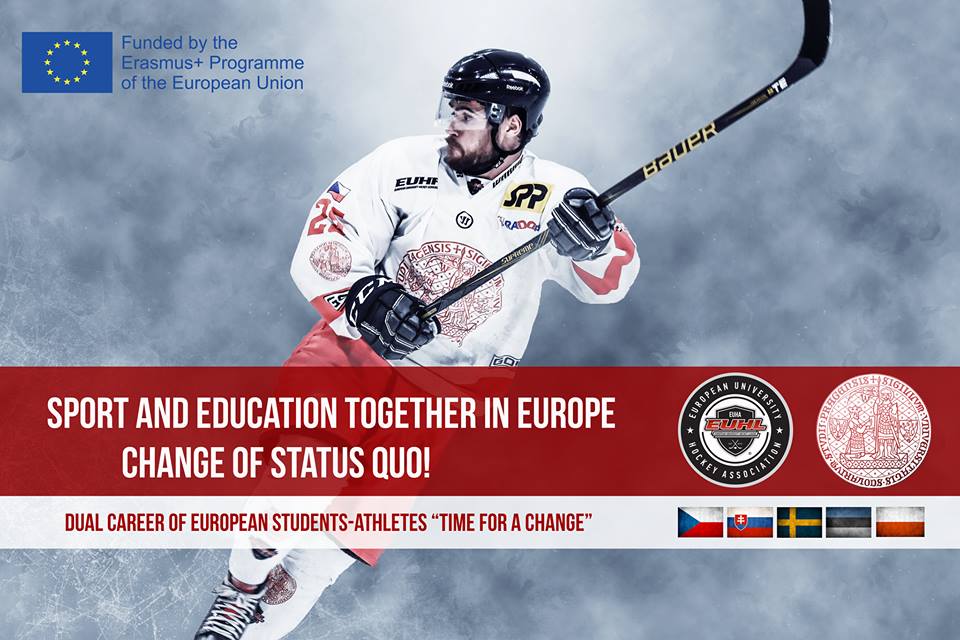 On September 23rd and 24th an international conference, organized by the Charles University ice hockey management team, took place at the Hotel Krystal in Prague. The conference was held under the auspices of the EU Erasmus + Project and was visited by representatives of university hockey leagues in Sweden and Estonia, as well as by representatives of teams already participating in the European University Hockey League. EUHL teams that were represented at the conference included Cavaliers Brno, Diplomat Pressburg, KTH Krynica 1928, UMB Banska Bystrica, Academics Pilsen and Engineers Prague. 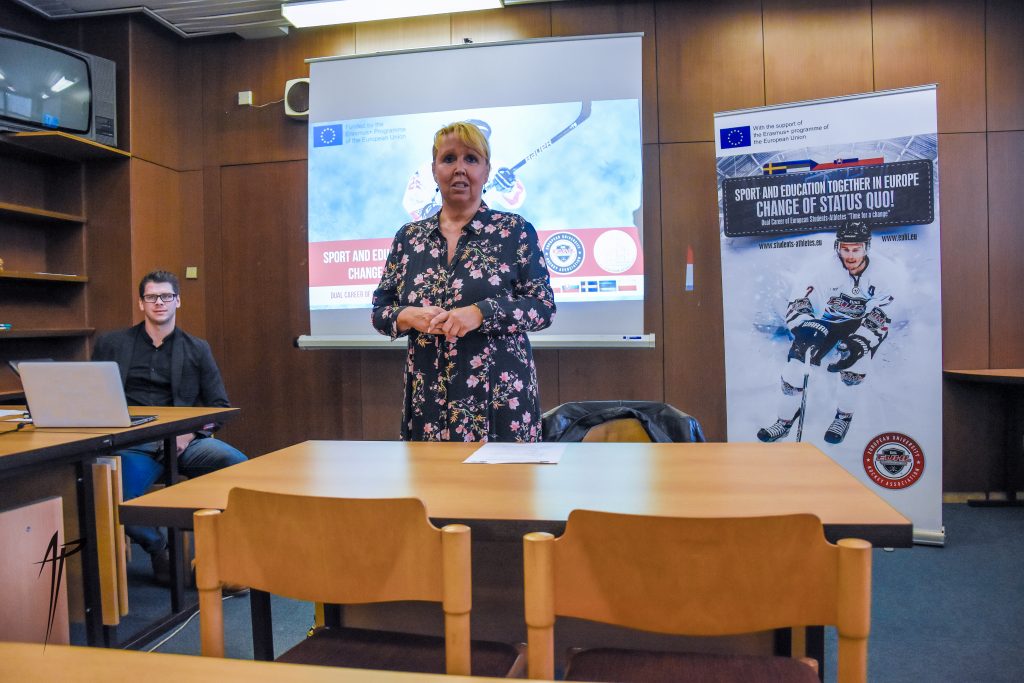 The main theme of the conference was the connection between sports and education in Europe. The program consisted of different presentations—in total there were 6 speakers, all of whom had something unique to say about the joining of sports and education. The presenters wanted to share their personal experiences with university sports, focusing on how athletics and education go hand in hand. A special focus was put onto how university sports prepare student-athletes to succeed in the real-world after their athletic careers have finished. The conference began with a great speech from the vice-rector of Charles University, Mrs. Prof. PaedDr. Radka Wildová, CSc who is also a big fan and supporter of the Charles University ice hockey team, as well as university hockey in general. 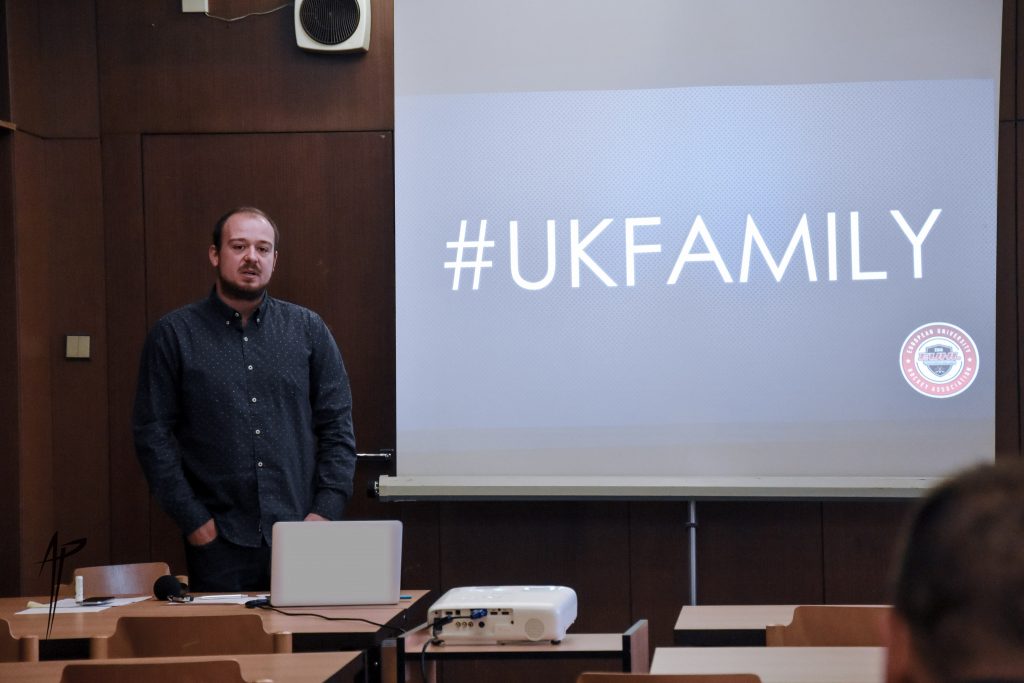 The first presenter was Jan Valder, an active member of the Charles University hockey team. Valder spoke about the history of the team and its myriad accomplishments. He also related his personal experiences of playing in the EUHL. Valder noted some statistics regarding Charles University players who have successfully graduated while playing for the team. These numbers included 22 bachelor’s degrees, 14 master’s degrees and 3 engineering degrees. He then spoke about former EUHL players who graduated in the last few years and are now coaching semi-professional or professional teams. Specifically, he mentioned Jan Kregl (HC Rytíři Kladno/CZE2), Karel Herr (HC Písek/CZE3) and Ondřej Krátký (Zoetermeer Panthers/NED). These coaches have utilized their experiences from college hockey to futher their coaching careers after their playing days ended. All 3 coaches share a common education history, since they all graduated from the Faculty of Physical Education and Sports at Charles University. Please find the presentation here 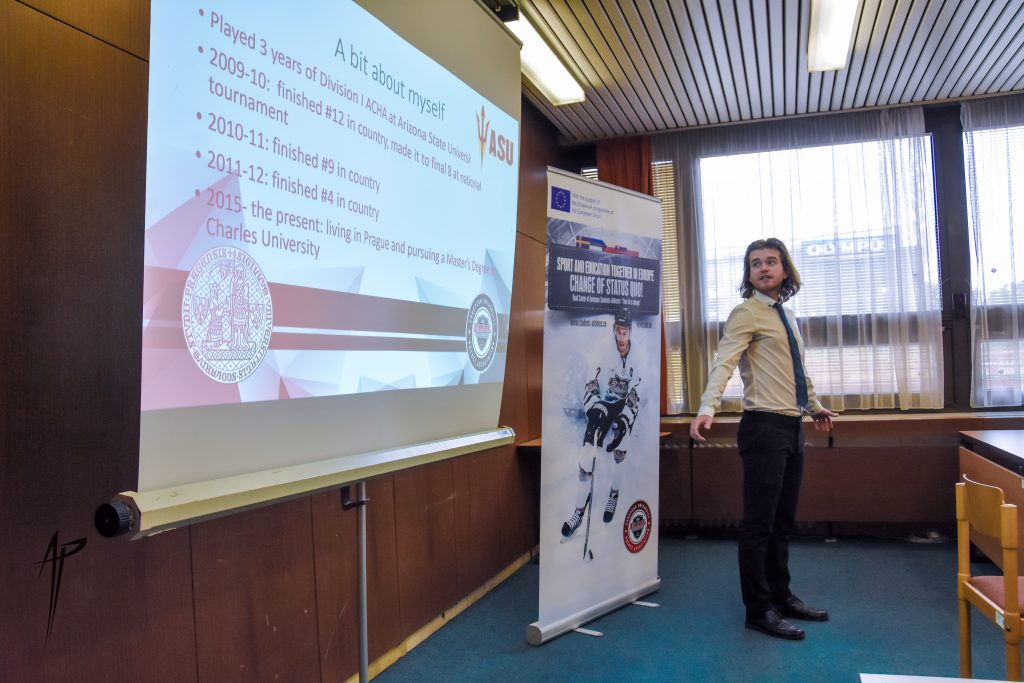 The next speaker was Patrick Rogan. Rogan is the first American-born member of the Charles University hockey team. He also went through the student-athlete process in the USA when he was a student and hockey player at Arizona State University. He spoke about the system of college sports, in general, in the US before specifically focusing on collegiate ice hockey. Please find the presentation here 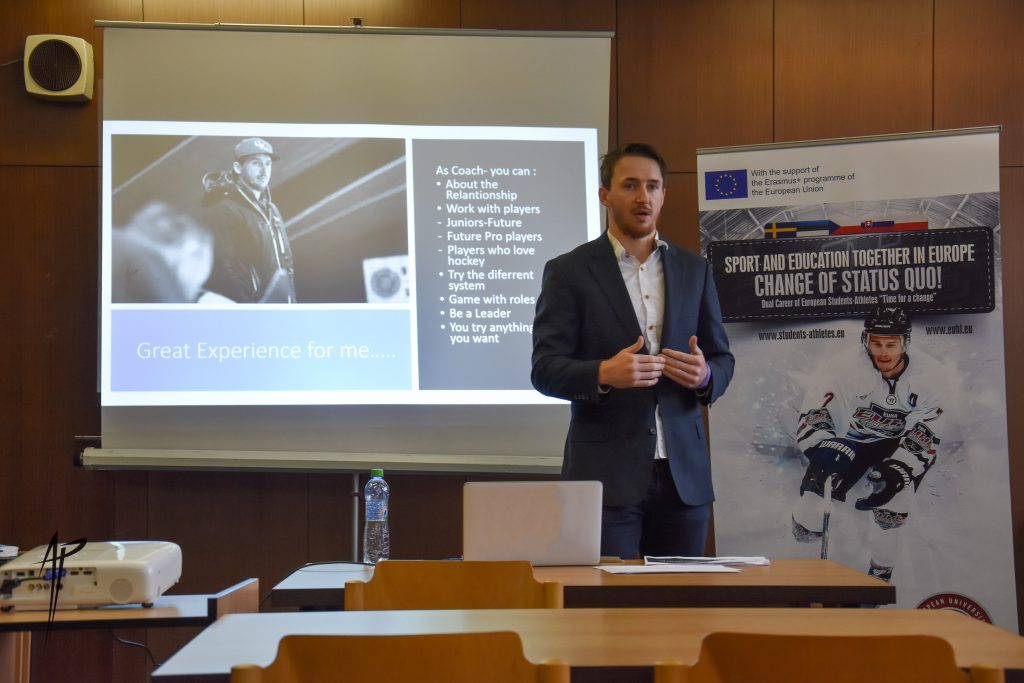 After a quick lunch, the conference continued with a presentation entitled ‘Opportunities for Young Coaches in the EUHL’ by Jan Kregl, ex-coach of Charles University hockey team. Kregl spoke about his experiences coaching in EUHL and how they helped him on the road to becoming a professional coach. Please find the presentation here 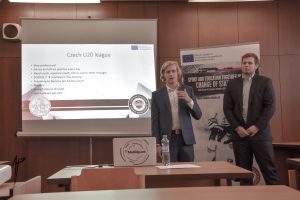 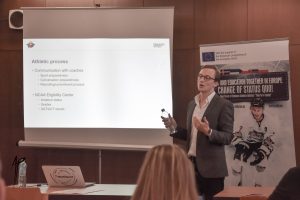 The next block of the conference was hosted by Václav Krudenc and Tomáš Brejcha, both of whom are active members of the Charles University team. They both have their own experience with hockey in the United States as they each spent time playing Junior and College hockey overseas. The two speakers emphasized the biggest differences between the European and American junior hockey systems and also described their personal lives during their seasons abroad. Please find the presentation here

The final speaker was Robert Sovík. This talented hockey player also played American college hockey and graduated from Hobart College in Upstate New York. After graduating, he started his own business which has become quite successful. He now helps athletes from around Europe to get scholarships and places on athletic teams at American universities. He discussed why student-athletes in the US are so appealing to most employers. He also spoke about the process every student-athlete must go through to commit to and enroll in an American university, as well at the requirements needed to graduate. 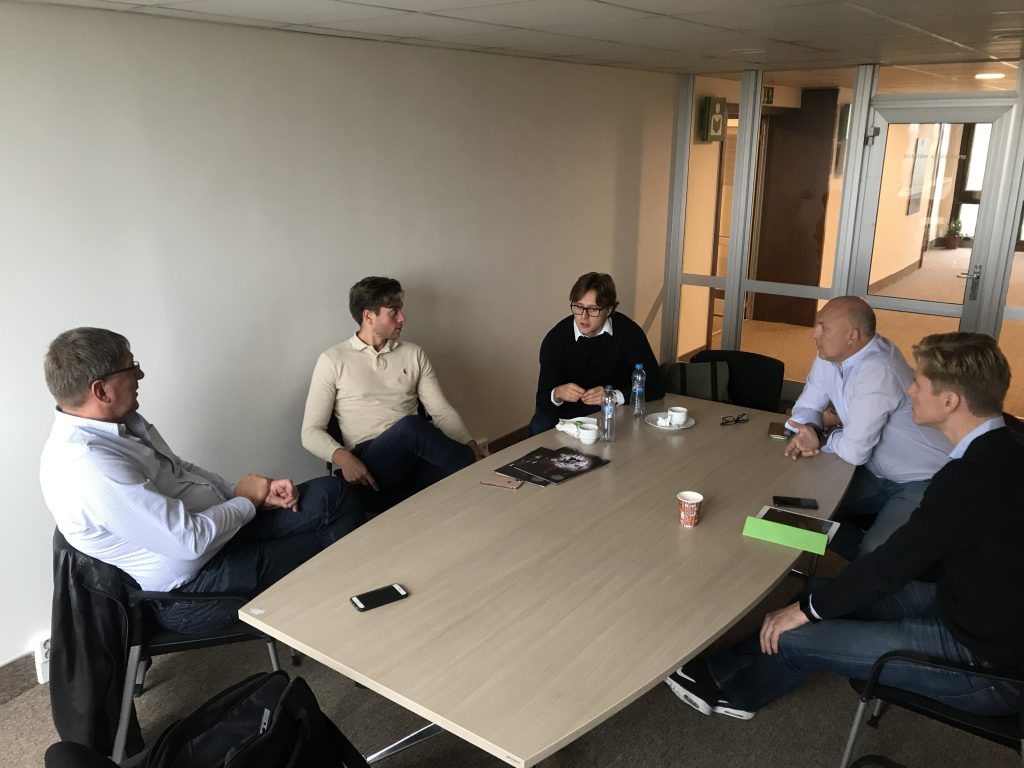 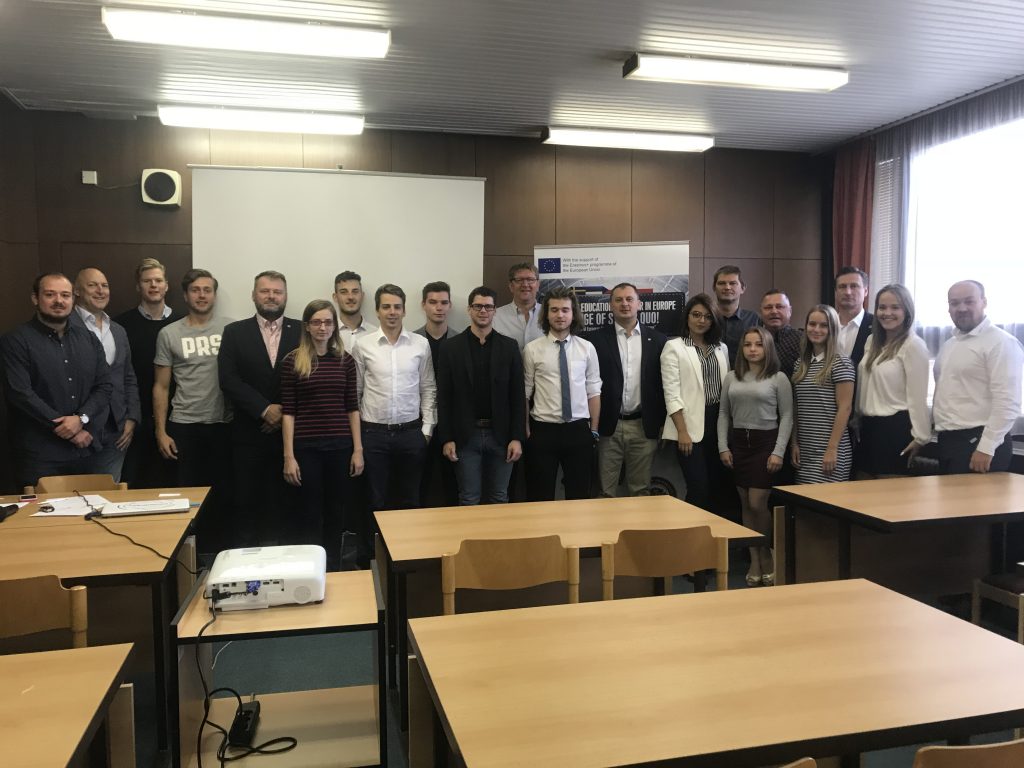 The presentations and, as a whole, the conference had one common message: that university sports should be a strong, integral part of college life in Europe, just as it has been in the last century in the US. The American example shows us that college sports have benefits for both for student-athletes as well as for universities. We hope to see enormous progress in regards to this part of student life here in Europe and we will continue to do our best to help. We are very happy and proud that we could organize the conference and we would like to thank all of the participants. 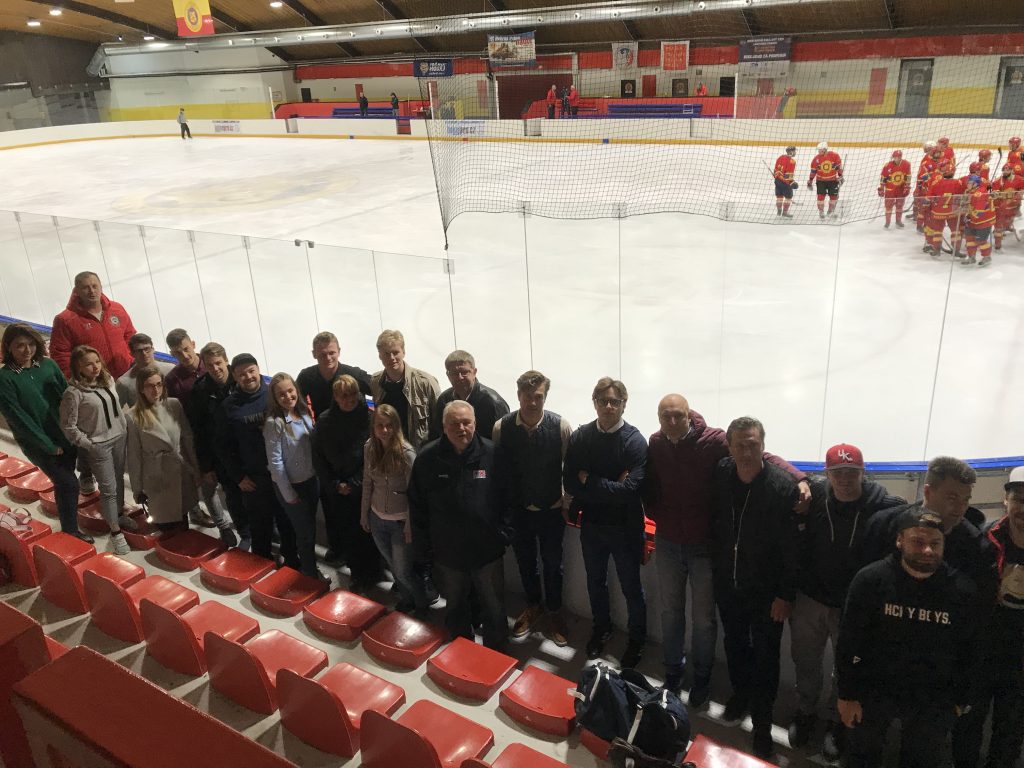 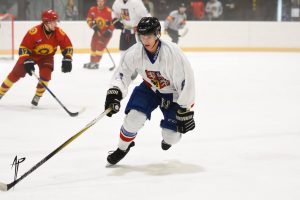 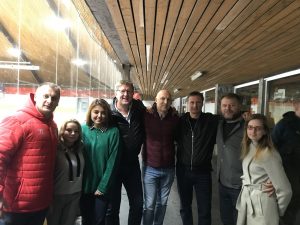 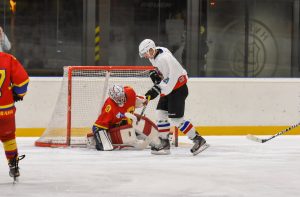 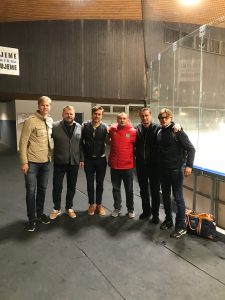 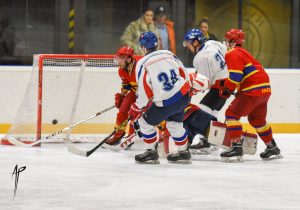 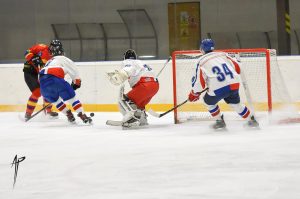 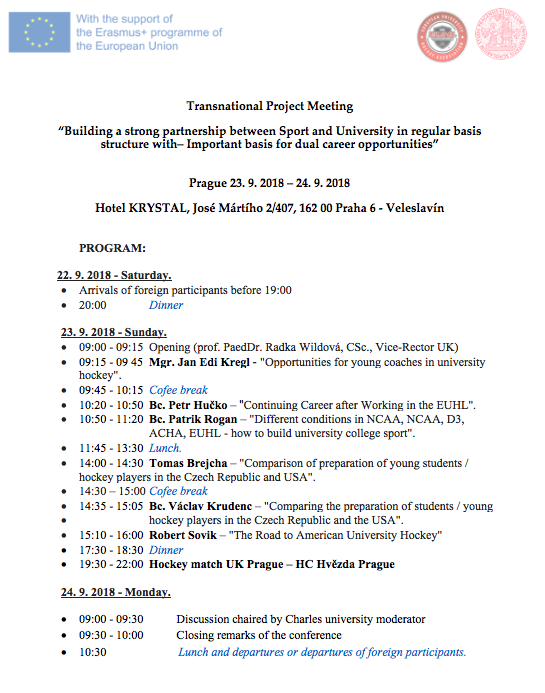