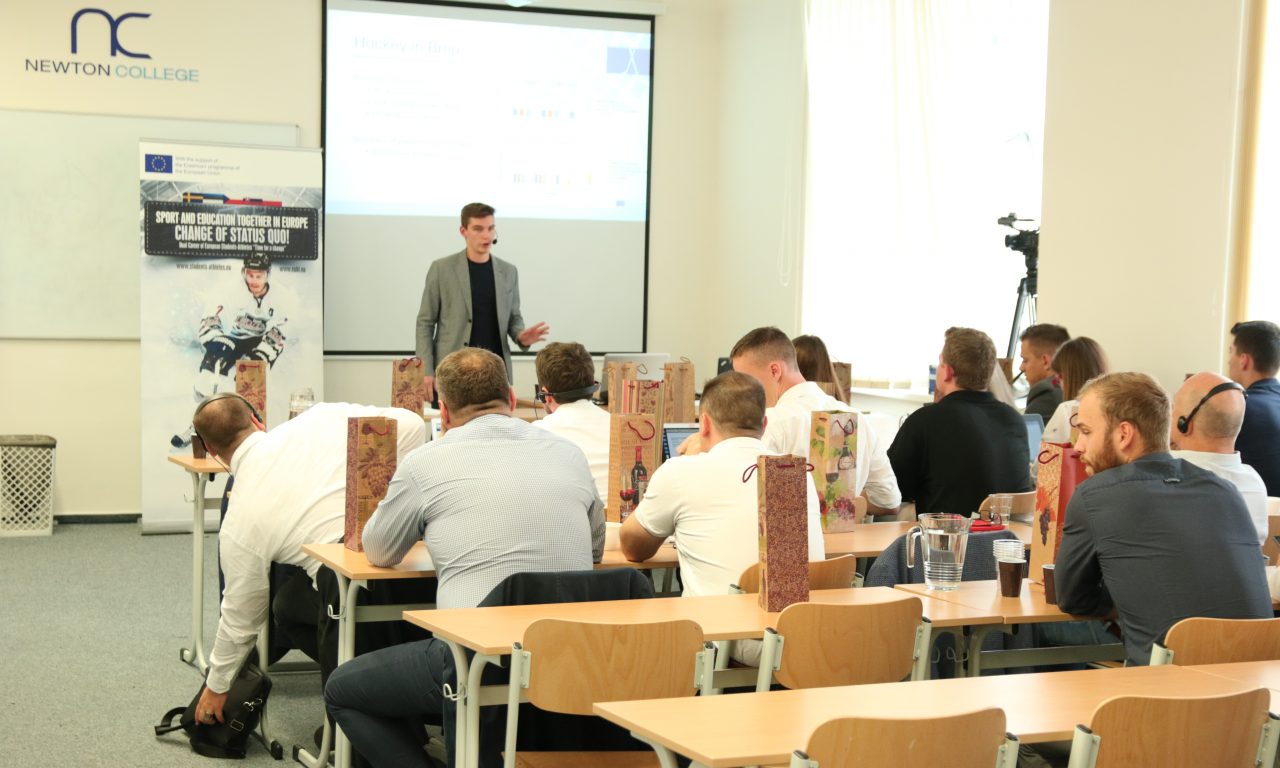 The two-day lasting conference Erasmus + hosted by European University Hockey League’s club Cavaliers Brno started on Friday in the building of NEWTON College. The presentations led by experts were about the Dual Career . 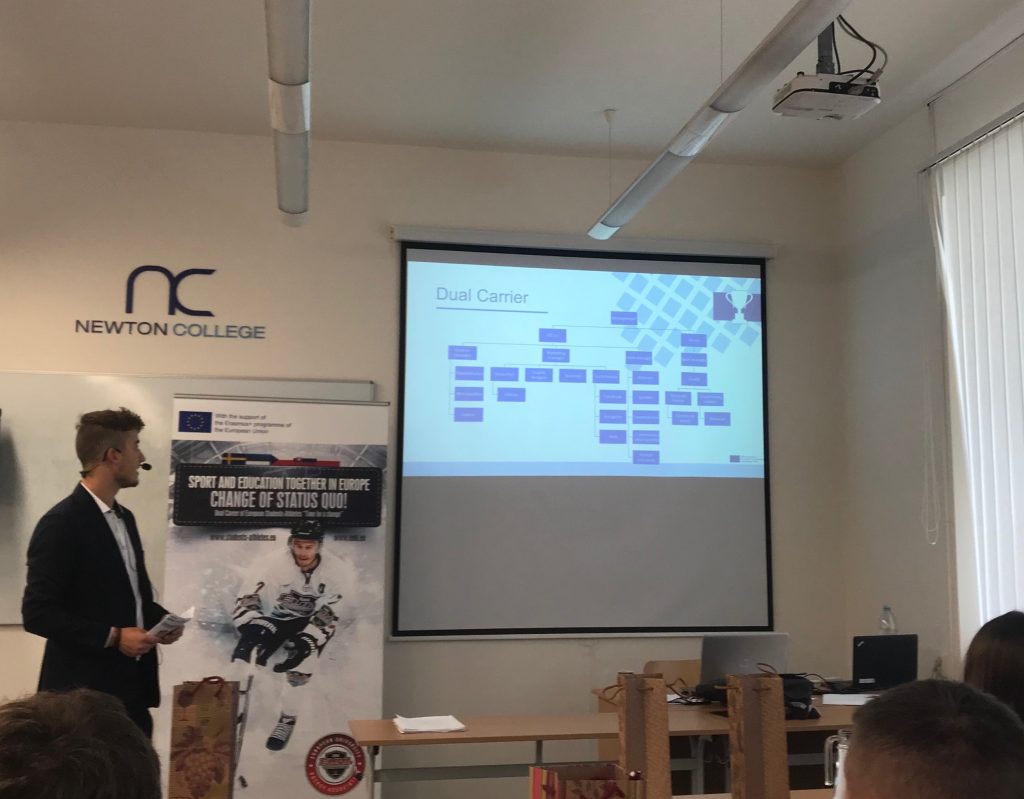 The speech which opened the conference was led by Daniel Jochman, co-founder of Cavaliers Brno. He started with brief information about the club, including outlining of the cooperation between Cavaliers, University of Defense and NEWTON College. “NEWTON College help us with marketing and schoolings for the players. The students of NEWTON College will be provided an option to enroll in a course on marketing in sports in return. University of Defense help us by letting us use their sports hall and swimming pools, where our players can train,” explained Jochman. For Cavaliers, the priority for the future is to form a cooperation with other universities in Brno. “We do our best to form a cooperation with Brno University of Technology or Mendel University,” he added. Another goal is to create a stable name for Cavaliers. “We want Cavaliers to become a strong brand, we want our fans to come watch the matches in Cavaliers jerseys, we want the fans to be proud of the university sport and Cavaliers Brno,” described Jochman. 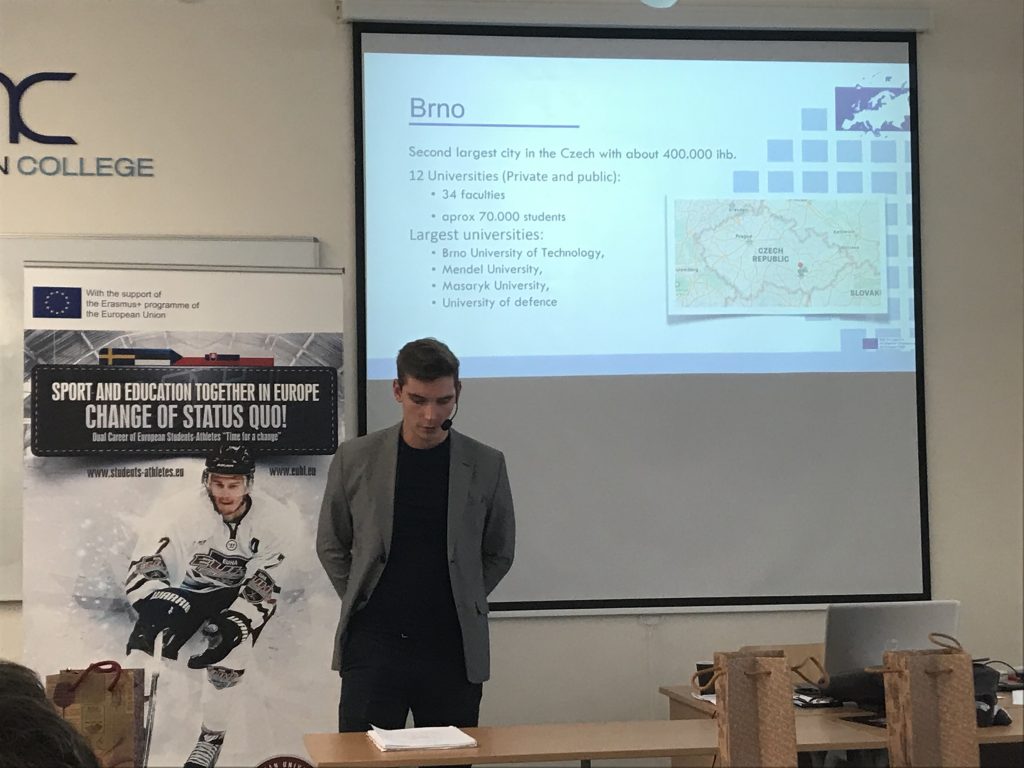 Filip Vojáček, also a co-founder of Cavaliers Brno, mentioned also cooperation with club HC Štika Rosice, which was formed by Cavaliers so the players could train and play in their sports hall. “Most of our players will play in Rosice. The boys will have 26 matches there and also they will get the option to train there three times a week. The advantage is, that we have the same trainer and the same system, therefore this cooperation should be good for the improvement of the players,” said Vojáček. Please find the presentation here 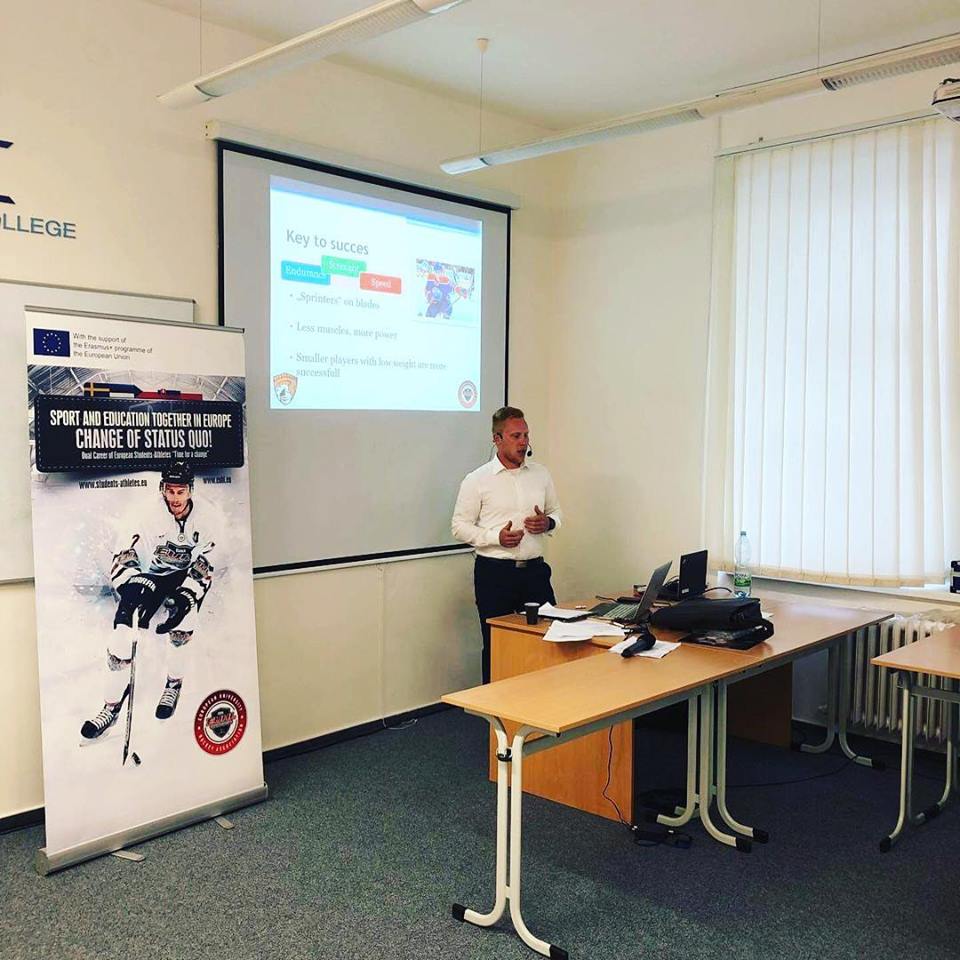 The problematics of fitness preparation was a topic presented by Štěpán Koukal, the conditioning trainer of Cavaliers. He explained for example the differences between two types of summer preparation. “Individual trainings mean usually big progress for the players, but there is a financial problem and also the problem that the team spirit disappears. That is why most of clubs don’t prefer this type of preparation,” explained Koukal. During the summer, Cavaliers had trainings in a gym two times a week. Koukal decided to find the golden mean between individual and team training. “The most important thing is to divide boys into smaller groups, so they could still improve individually, but with others. But of course a goalkeeper cannot be paired with the strongest man of the team,” he outlined.  As Cavaliers informed before, Koukal found the inspiration for the summer preparation in american model unique in Czech republic. “We will see how it worked during the season. Of course there is a difference between using this model on professionals and non-professionals. But Cavaliers are not afraid of new challenges, so I was allowed to try it with boys when I presented the idea,” he added. Please find the presentation here 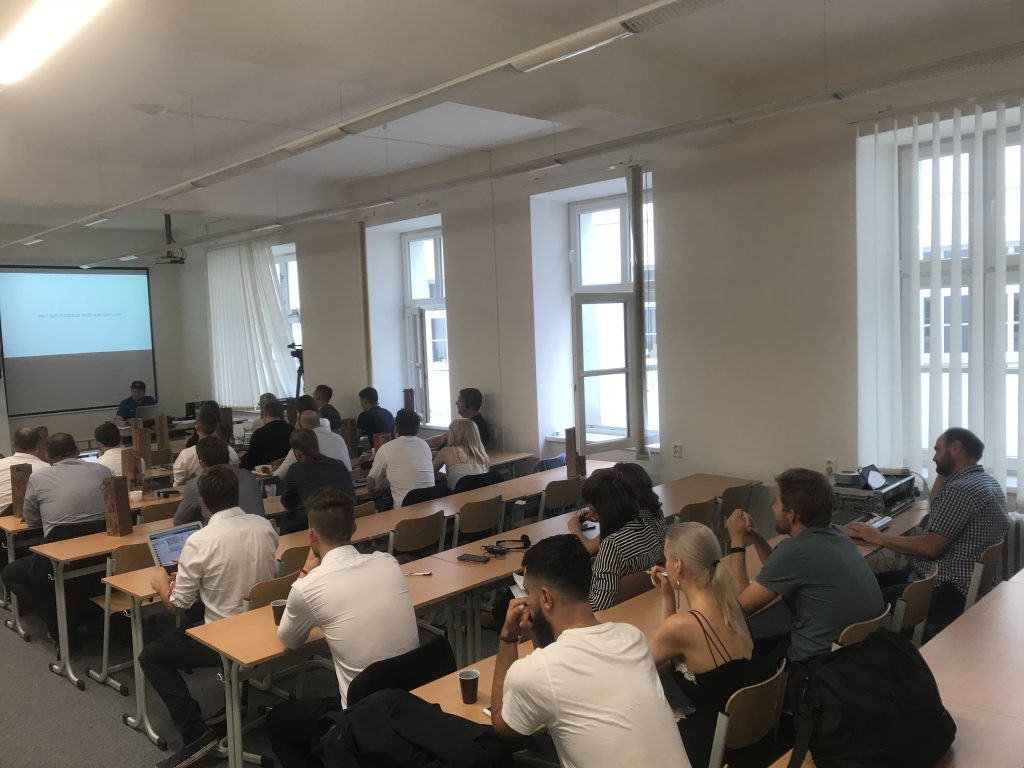 Vašek Trávníček of HC Kometa Brno talked during about representation and the relationships between hockey clubs and media. He for example tried to define the target group. “The club is only as big as is the amount of people standing behind. When you manage to define the target group right, you can easily deduce how the audience will react, what they need, and then you also get to know, how the treat them right. And support from audience leads to support from partners or politicians,” described Trávníček. The options of enlarging the audience via media, for example by posting articles on Hokej.cz, was a topic of Pavel Kuba’s presentation. “Every time the club is preparing something extraordinary, every time they have an idea for an article or a video, they can let us know. The main subject does not have to be only game, it can be about any action for the fans as well,” he explained. Please find the presentation here 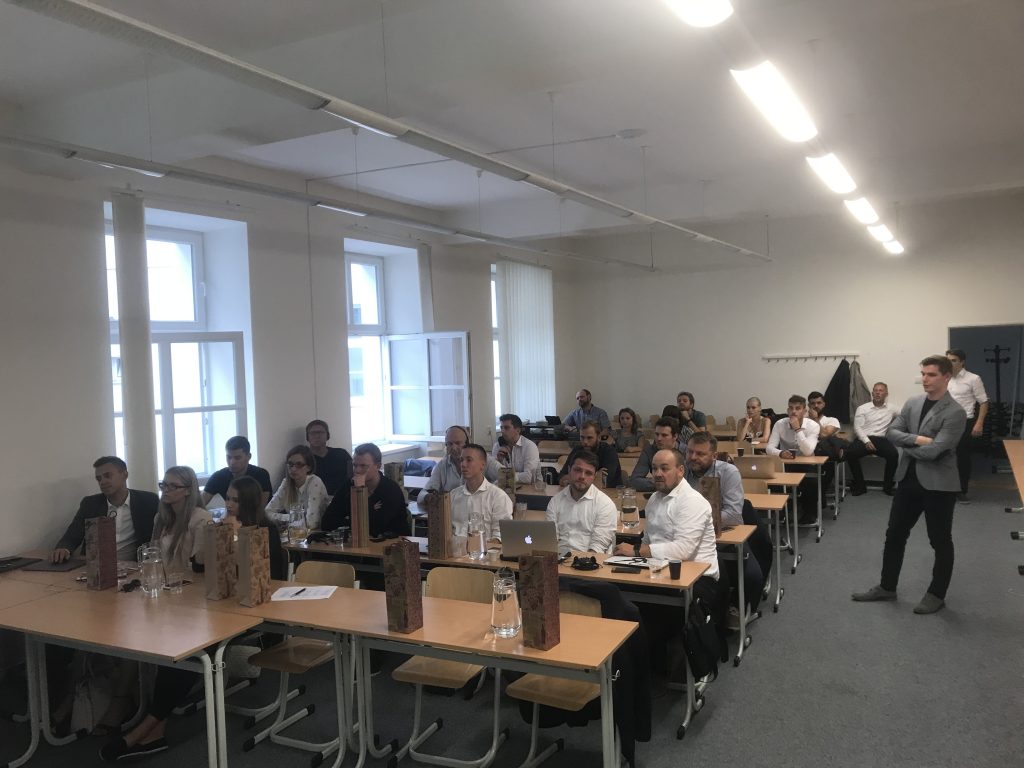 Marcel Štěpánek, airman-technician of the army and Cavaliers forward, ended the Friday part of the program with his presentation. “European University Hockey League is a great opportunity for young boys. It gives them the opportunity to fill their lives with passion, to do something they love, to play hockey and to be able to combine hockey with studying,” described Štěpánek. Štěpánek, who stopped playing professional hockey at the age of twenty, got his master’s degree of Aeronautical engineering on University of Defense. He got the opportunity to play again when the club Cavaliers Brno was founded. “I am glad to be a part of this team. Thanks to Cavaliers I again realized how much hockey means to me,” he expressed. According to Štěpánek’s words, the advantages of European University Hockey League is the youth of the players and the professional attitude. 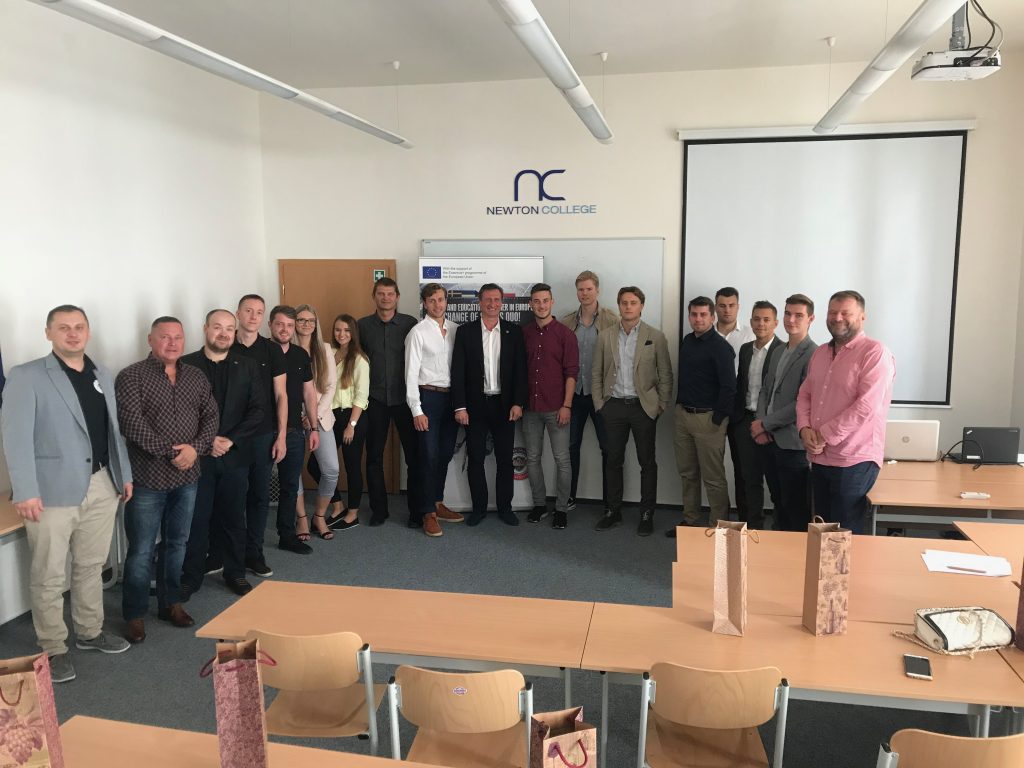 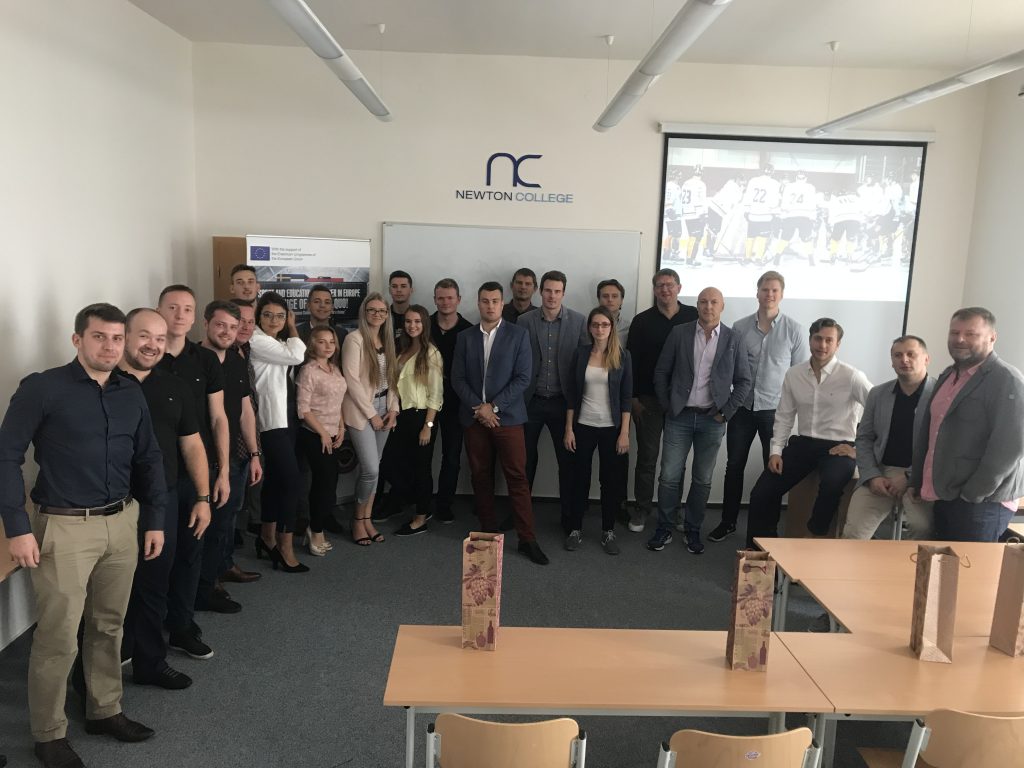 Part of Transnational project meeting was a promotional package as workshop focused on a sport event organization where the hosting university Cavaliers Brno showed an ice hockey game organization as a good practice for dual carrier opportunities. 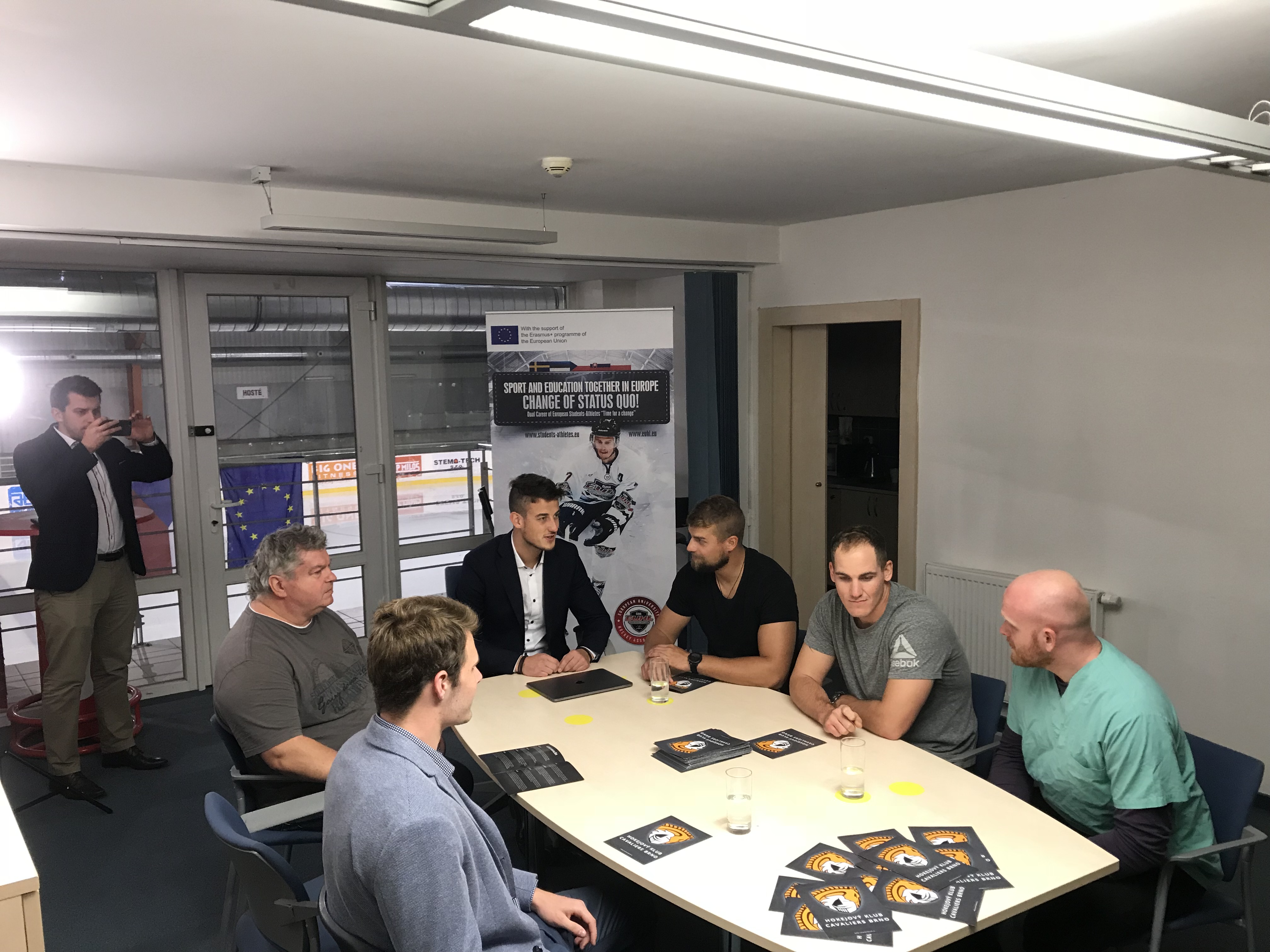 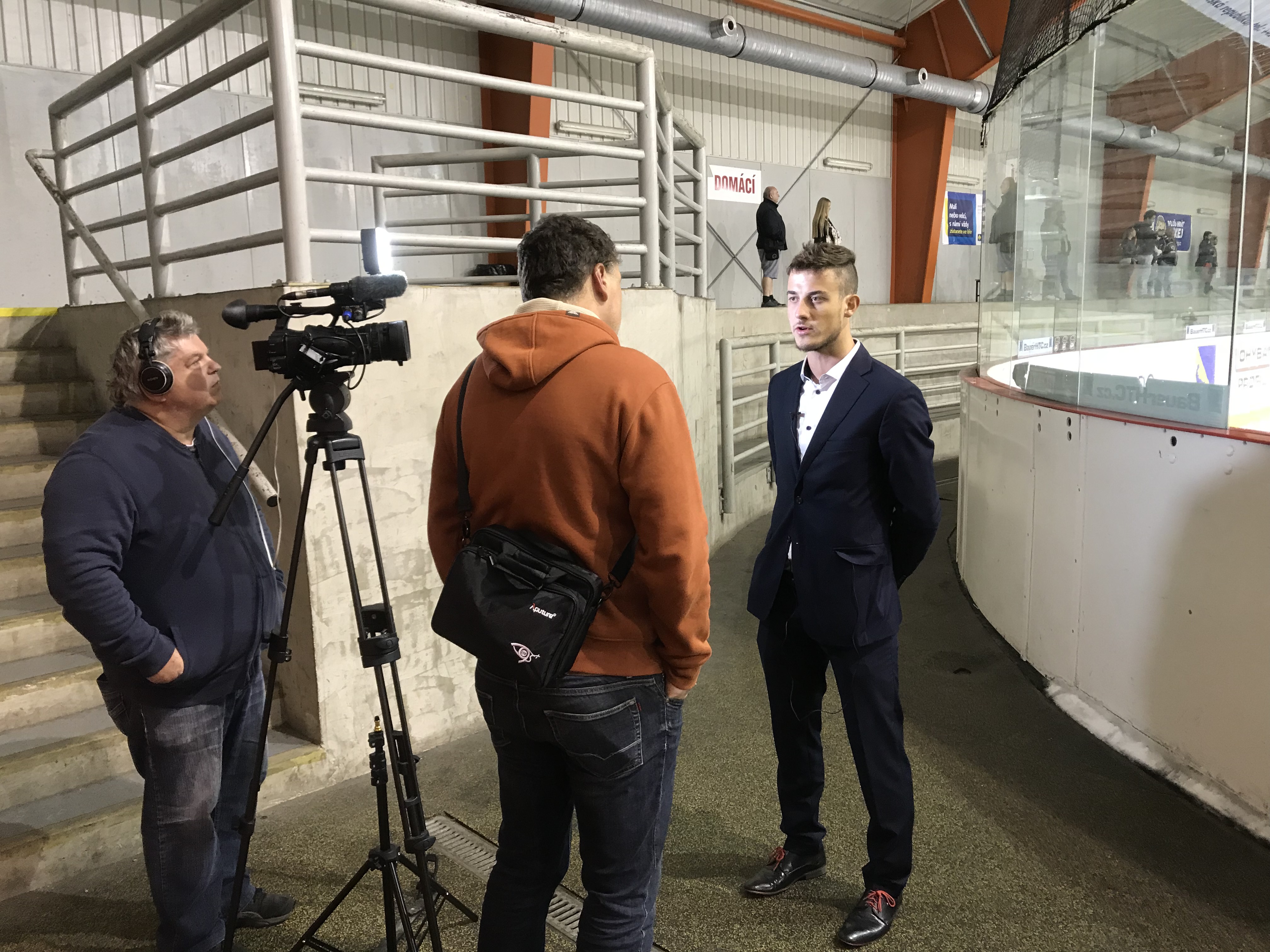 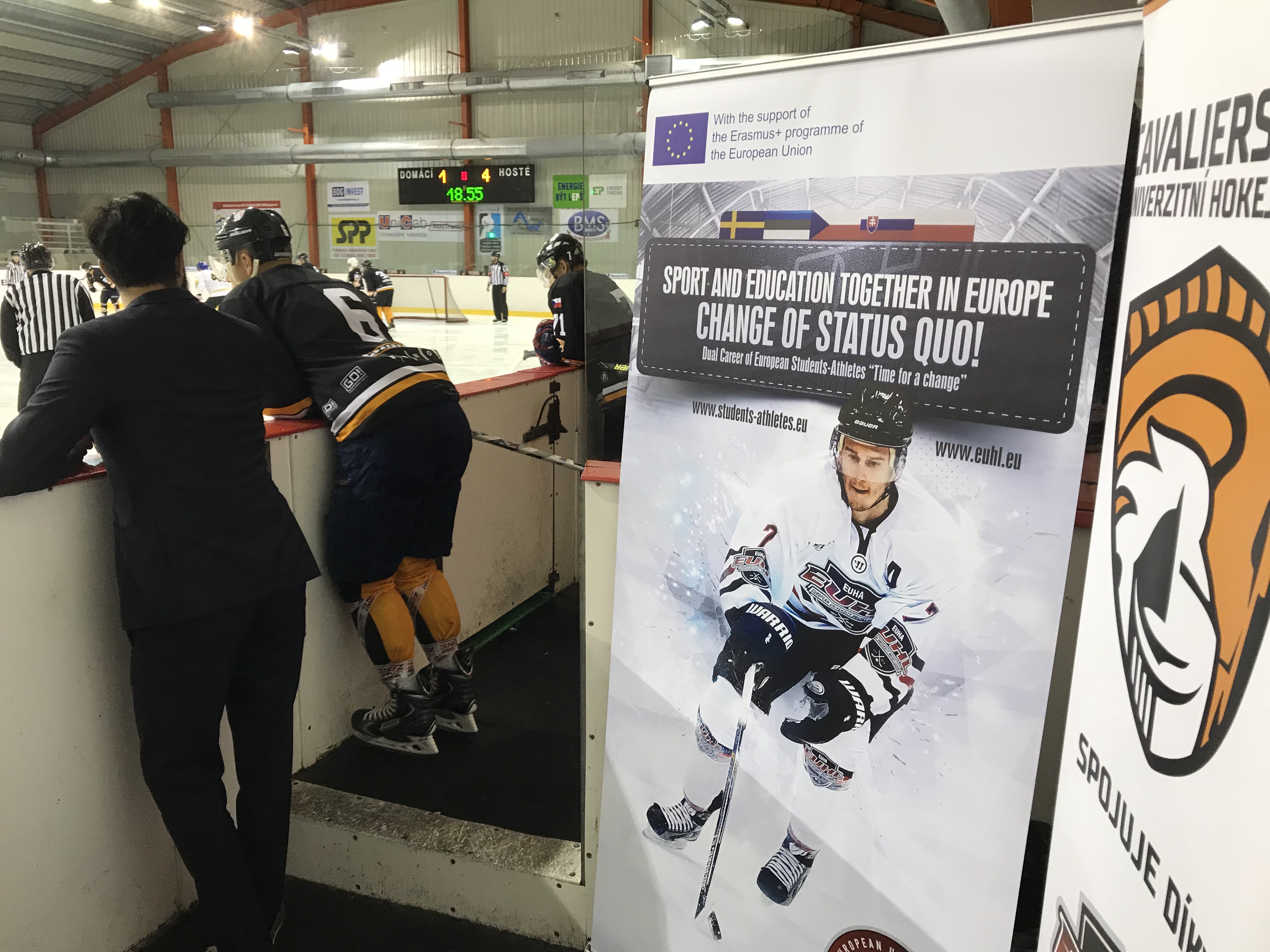 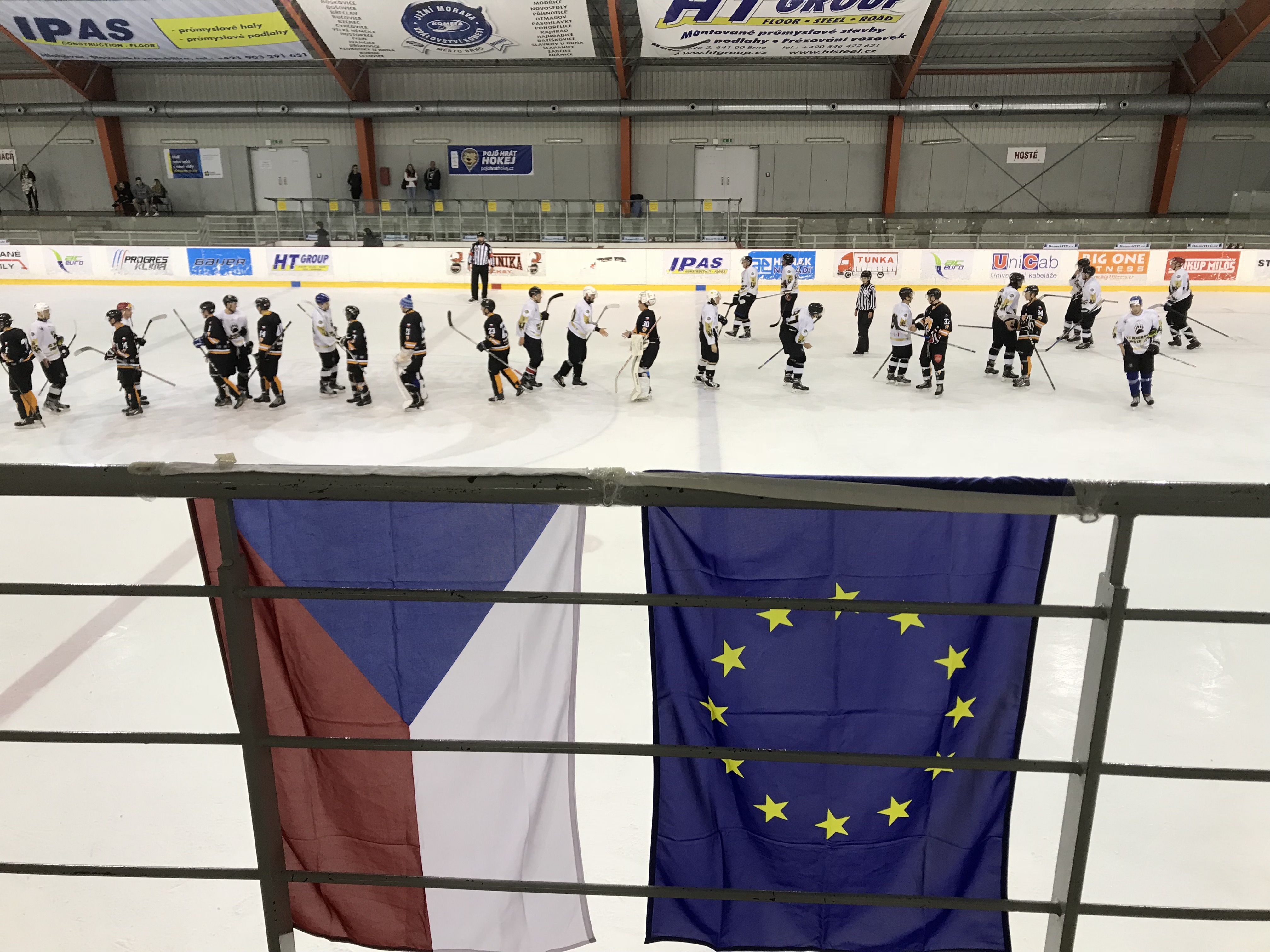 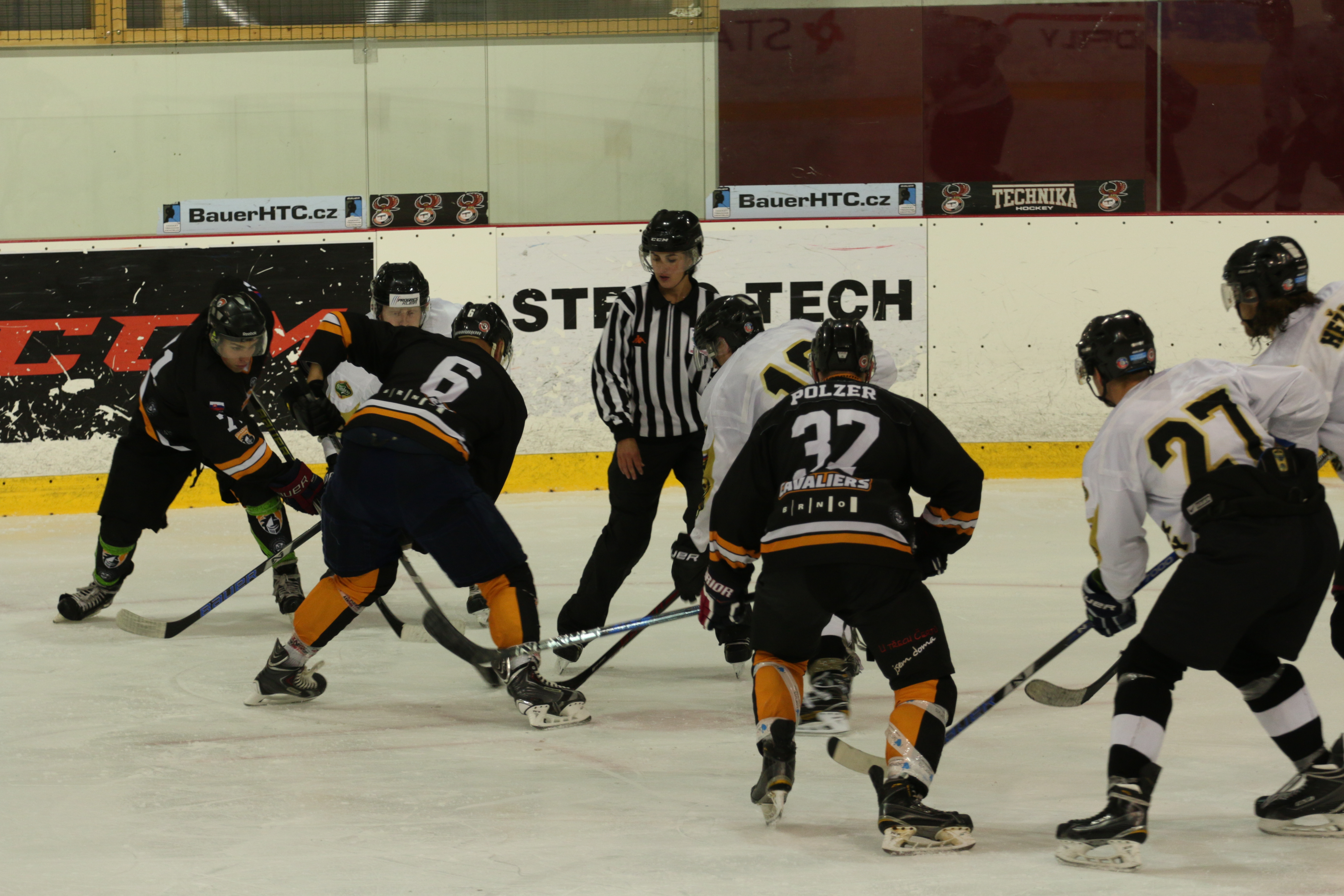 Program of the TPM