The beginning of the Final Transnational Project Meeting with all project representatives and other guests started with the networking dinner of 22nd Jun 2019. The event also served the purposes of know how and best practices exchange including the practice of showing appreciation for building university hockey and the dual career of an athlete student in the EU.

On June the 23rd and 24th an international conference was held in Bratislava, hosted by European University Hockey Association.  The conference took place at the Hotel Bratislava.  The conference was held under the support of the EU Erasmus+ Project, the project which intention is to develop the dual career opportunities in European universities.  The meeting included representatives from Sweden, Slovakia, Poland, Czech Republic and Estonia.  Several of the participants are part of universities from the European University Hockey League, those teams were; Univerzita Karlova, Klub Absolventov, Cavaliers Brno Z.S., Univerzita Mateja Bela V Banskej Bystrici, Wyższa Szkoła Biznesu National-Louis University w Nowym Sączu, VSK CVUT Praha, Akademics Pilsen.

The program had several different speakers. Mr František Sádecký, the EUHA representative presented the most actual information about the intellectual output materials, that are prepared by EUHA as a main partner of the whole project.  These outputs contain also good practices used by partners of the project to implement the Dual career system for students – athletes in their university hockey clubs.  The way of dissemination and timing of issuing of intellectual outputs and all other information about the content of the whole project  were explained as well during the meeting.   Then each partner of the project referred in the presentation summary what best practices were identified during the transnational project meeting organised by each project partner.  The representative of the Charles university, Mr. Hučko was talking about the way how to get the best of out of the dual career in hockey and education and included all possible areas for realization of students-athletes and other students. Mr. Enden, from the project partner Mittetulundusuhing Baltic Selects Estonia describe in his summary the best practice how the student-hockey team should communicate with external stakeholders and listed the best ways how to communicate.  Miss Burnay who represents project partner Wyższa Szkoła Biznesu National-Louis University w Nowym Sączu described in power point slides how the hockey training and game schedule should be best fitted in the study schedule.  Mr. Kysel from the University of Matej Bel in Banská Bystrica had described in details what are the tasks and responsibilities of the manager of the student-hockey league and how should these tasks be done most effectively. Afterwards the discussion tables were held on the topic of how to create networks where dual career opportunities should be promoted and shared with potential students-athletes, parents and other stakeholders, however with the outcome that the best online medium where prospective student-athletes could learn about European Universities currently offering of dual career system in studies and hockey is the website of the European Hockey League Association (EUHA). 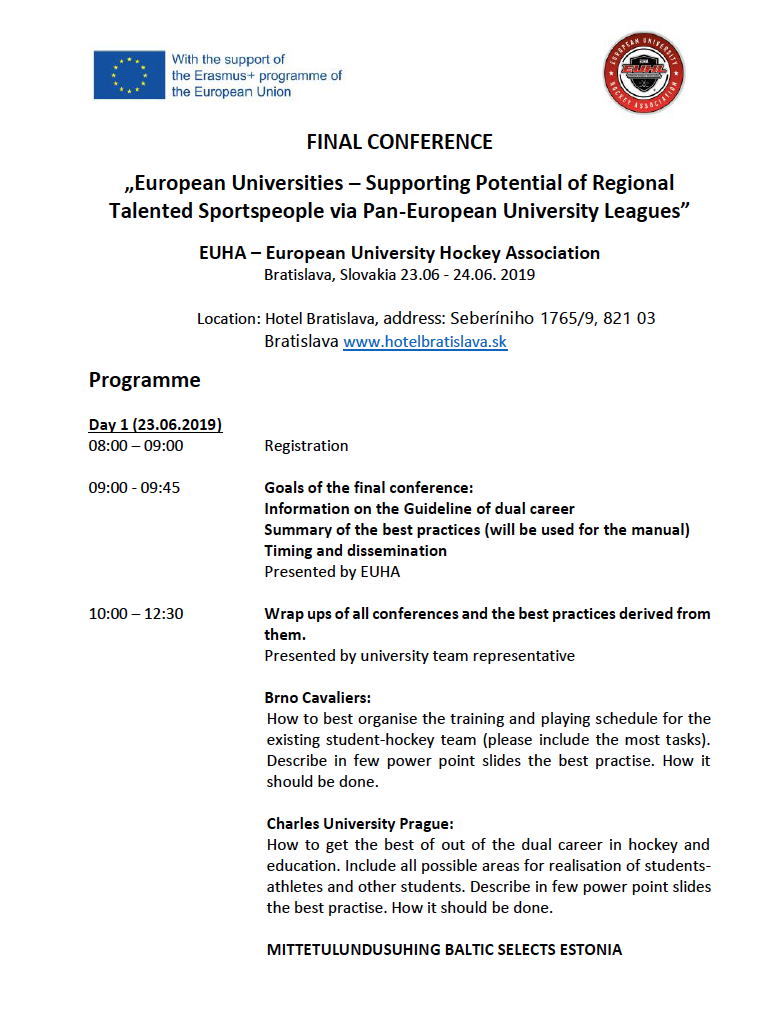 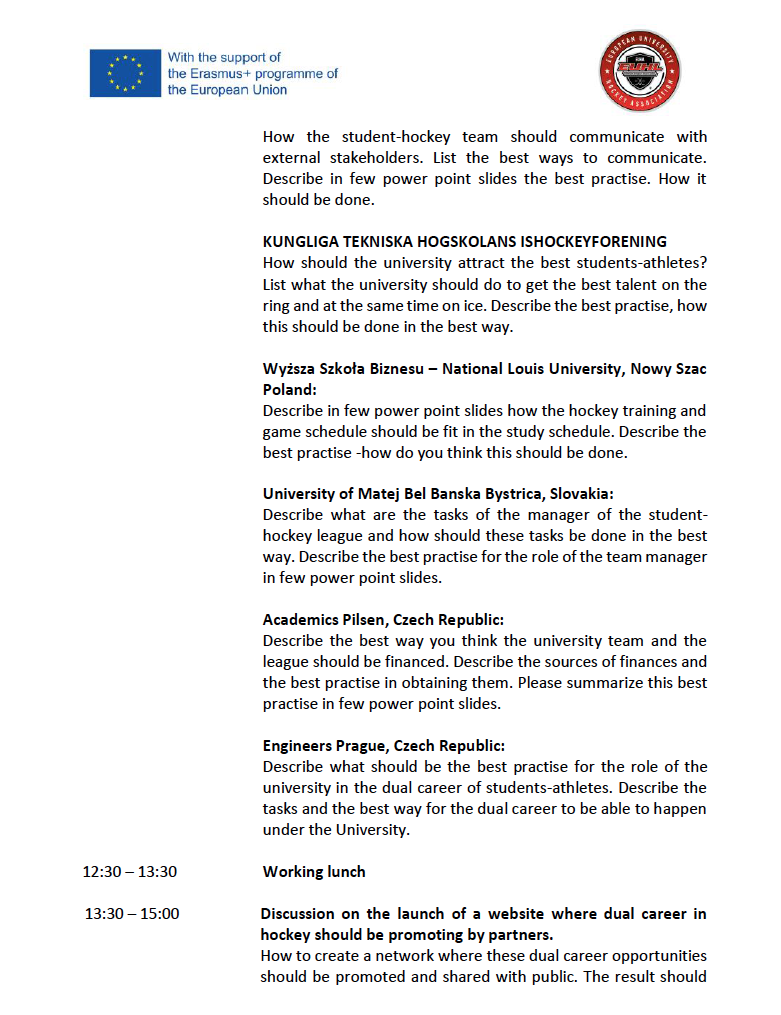 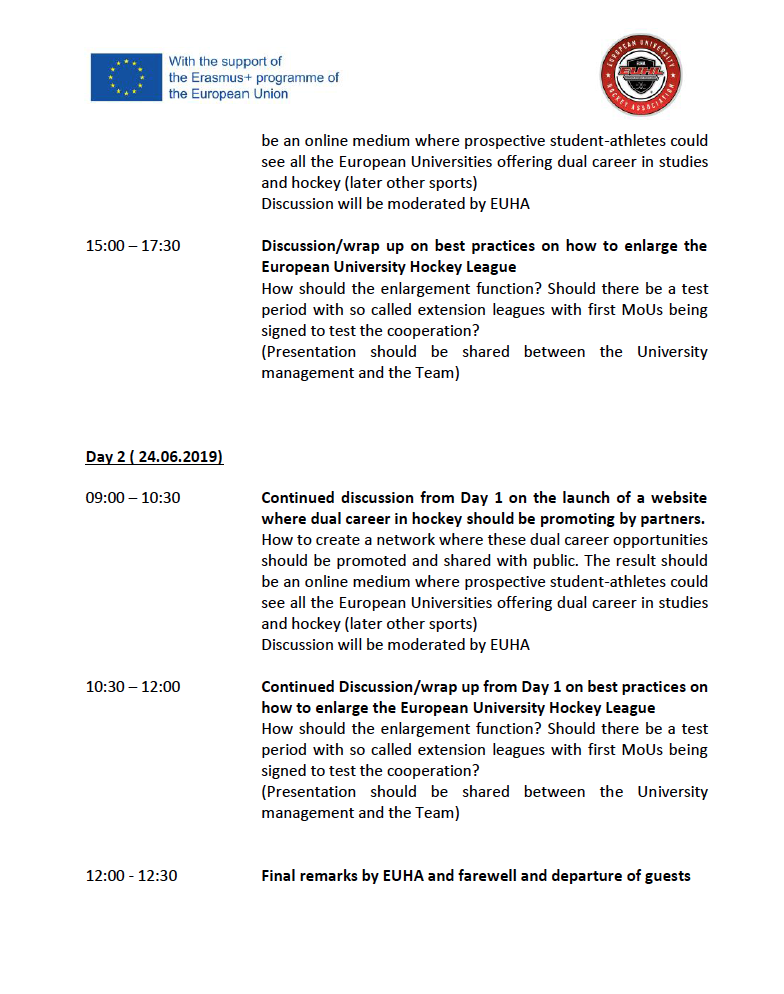 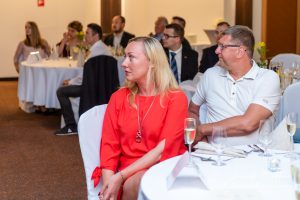 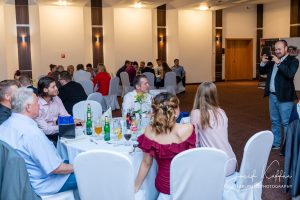 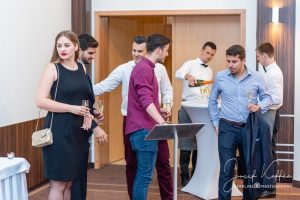 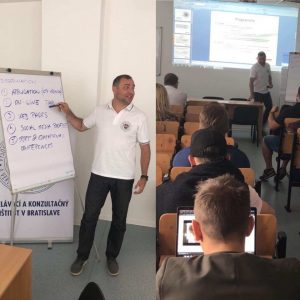