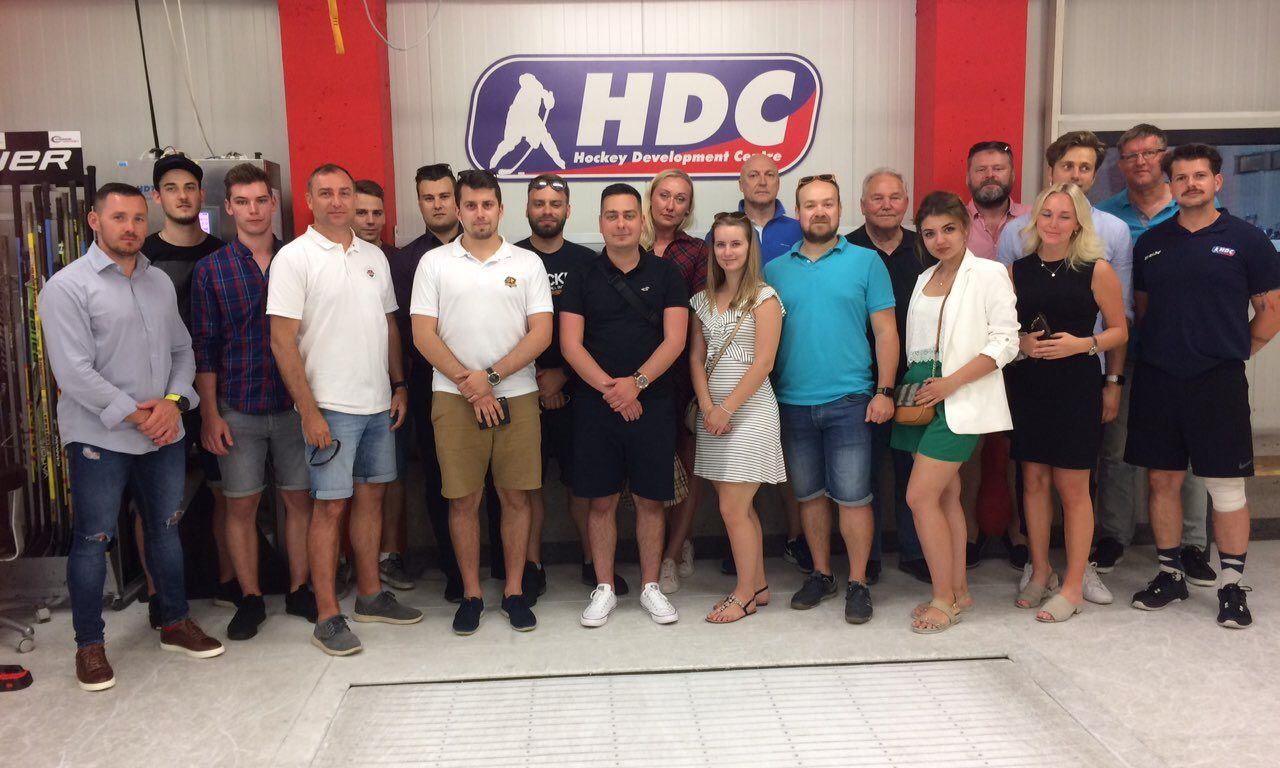 During the days of 21.6. and 22.6.2019 took place another Transnational Project Meeting. The organizer of the meeting was Klub Absolventov which acts along VŠMVV Prague – Educational and Consulting Institute in Bratislava. Under the leadership of the club there is a hockey team in European University Hockey League (EUHL) called Diplomats Pressburg.

Transnational Project Meeting lectures part took place in the premises of VŠMVV Prague – Educational and Consulting Institute in Bratislava. Guests were staying in a hotel Bratislava situated in the wider centrum of Bratislava city.

The meeting was held under the support of EU Erasmus+ project, whose intention is to develop the dual career opportunities in Europe. Participants of the meeting were representatives from  Slovakia, Czech republic, Poland, Sweden and Estonia. Most of the representatives are people from hockey teams who are members of European University Hockey Association (EUHA).

The main topic of the meeting was: „Build a strong partnership between Sport and University on regular basis structure – Important basis for dual career opportunities“.

On 21.6.2019, the next point of the meeting after the working lunch was - „Intro to conference Agenda and presenting the main goal of the meeting at the VŠMVV Prague – Educational and Consulting Institute in Bratislava premises. The main word had the manager of the Diplomats Pressburg hockey team – Bc. Lukáš Žiga.

The first speaker was PhDr. Ľudovít Hucík, PhD., MBA – the director of the VŠMVV Prague – Educational and Consulting Institute in Bratislava. He welcomed all the participants of Transnational Project Meeting and he also introduced our school/college. He stressed the need to promote an advantages of the dual athletes career. Professional athletes should not forget about education and in addition to a sports career, they should acquire education, expertise and be prepared for a real life after an active career.

The second speaker was Peter Podhradský – a professional hockey player, a player in KHL, representant of the Slovak republic. The topic of his contribution was: „Identifying positions/area in the student hockey league where involvement of sport professional is desired and athlete´s life after the end of Professional career“. Peter Podhradský was speaking about his professional career and his experiences in a very interesting way. He currently passes on his experience to young athletes. Currently, among other activities, he is in the position of second coach of Diplomats Pressburg hockey team. At the end of his contribution there was a discussion with other participants of the conference. The participants asked Peter many questions about his experiences and also questions from his activity in the world´s top hockey leagues.

The last speaker was Mgr. Igor Karba – an employee of Ministry of Education, Science, Research and Sport of Slovak republic, at the same time a graduate of VŠMVV Prague – Educational and Consulting Institute in Bratislava and a former player of Diplomats Pressburg hockey team.

The topic of his contribution was:“ Possibilities of supporting the Ministry of Education, Science, Research and Sport of Slovak republic for student – athletes development“. He presented the ways and possibilities of the sport support at schools. All the information was backed up by the results of a statistical research.

The last point of the meeting was a Multiplier sport event, which was held in HDC Slovakia (Hockey Development Centrum). The center is dedicated to individual preparation of hockey players.

Individual HDC Slovakia technologies were introduced within the event.

All the multiplier sport event participants tried all of these new ice hockey technologies.  The HDC Slovakia presentation was very interesting and at the end of it, there was extensive discussion about possibilities of players preparation. Nowadays, an individual players preparation moves forward very fast. The HDC Slovakia methodology is very progressive in this respect. The general manager of the centrum is Miroslav Lažo who is from the season 2018/2019 the head coach of Diplomats Pressburg hockey team and at the same time he is a student of VŠMVV Prague – Educational and Consulting Institute in Bratislava. He was an Professional hockey player in Europe (Germany, Czech republic, Sweden, Slovakia and Russia). His long-term hockey experience complete these achievements: quadruple master of Slovakia, MPV All Stars Game Czecho-Slovakia 2006 and the fastest skater of All Stars Game 2006.

The day finished by the networking dinner in Mari Kiri restaurant. This was a great end of the day. Everybody shared their thoughts from the first day of the conference. All participants were talking about a new ideas coming from presentations and discussions. This day opened minds to many of them.

The discussion part took place in the University itself. At this meeting three topics were discussed. Therefore we decided to make three discussion tables with each one of them solving one of the following questions:

Table 1 : Identify activities in the students-hockey league where the help of sport professional would make a major difference in the quality of the league?

Table 2 :What are the possible ways the university teams could pay for these services of the sport professionals except for money?

After two hours of discussions we came to capturing the outcome of discussion tables and made a lot of notes. Let us summarize the ideas we managed to come up with.

In terms of using ex-professional players we can clearly see the potential in more of a marketing way. This means the ex-professional can be a really useful part of bringing more people to university hockey matches, creating much better atmosphere for athletes to compete in which could result in both improving the level of league and also to rise more awareness in wide public about EUHL.

Another opportunity would be to take advantage of good name of few professionals or coaches which are well known in order to organize hockey camps for both young children and university athletes. This could make parents and especially their children interested in ice hockey much more as it is a priority for every parent to take care of health and well-being of their child. By this we can increase the player base and therefore improve the league over all.

And for the last point touching on the Alumni. A lot of university hockey teams are already cooperating with few of the alumni of various ways such as using them as coaches, marketing experts or at least promotion since alumni are perfect way to raise awareness of both the hockey club and the university itself. They are now living their professional life, making business with a lot of potential sponsors for league and so we believe i tis important to keep in touch with them.

So the discussion and day finished by presenting these ideas. Afterwards we had networking lunch and we said goodbye to all of our guests. 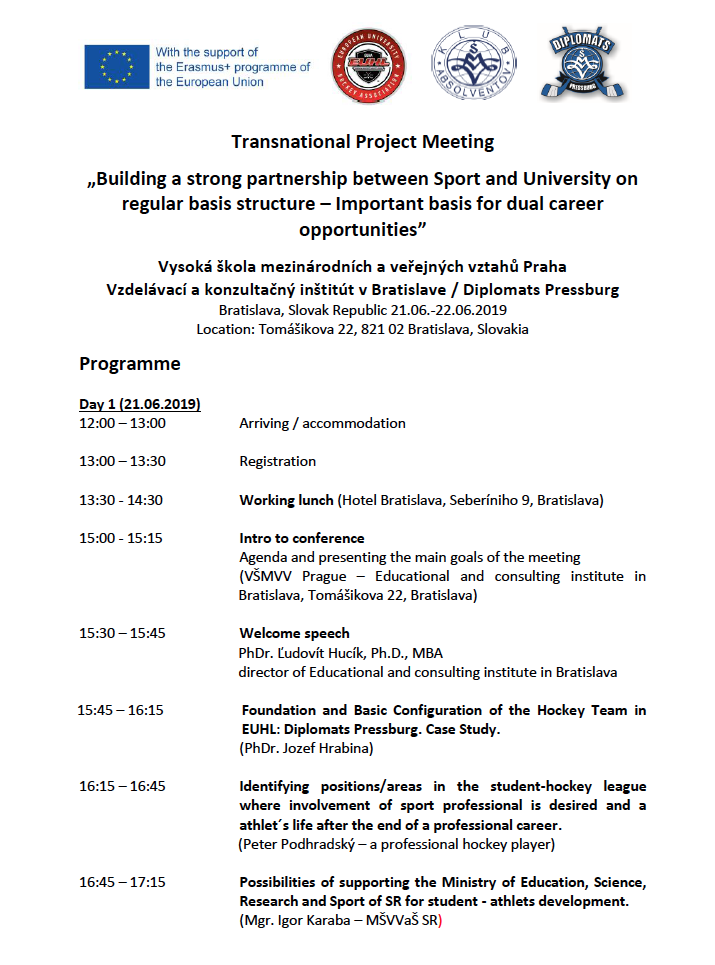 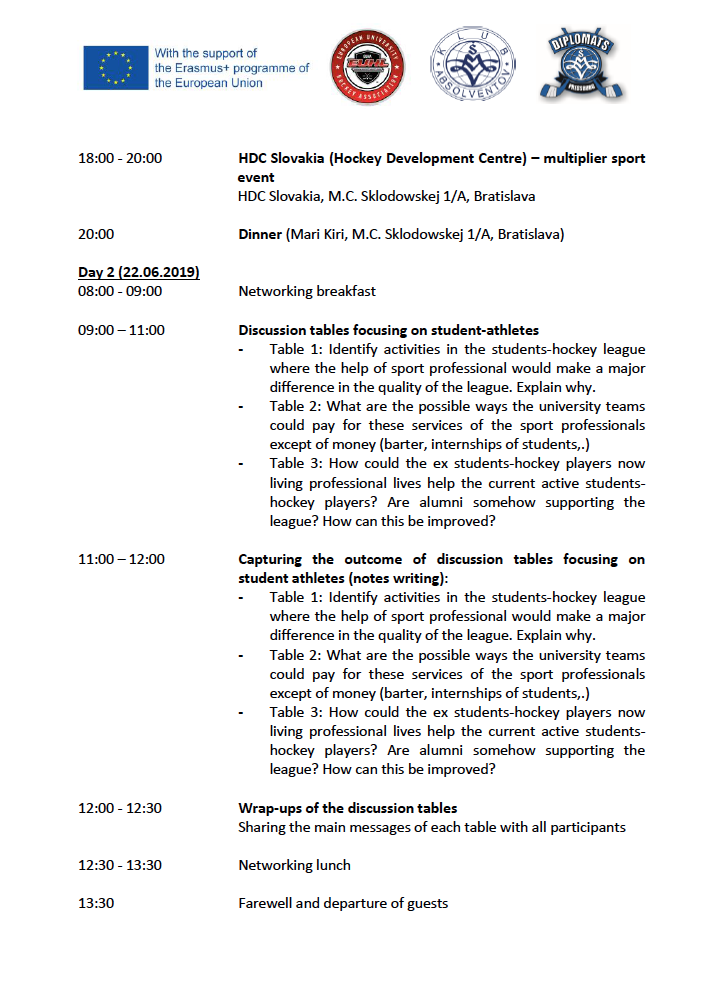 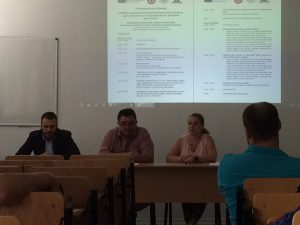 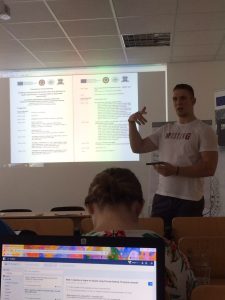 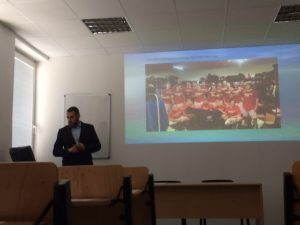 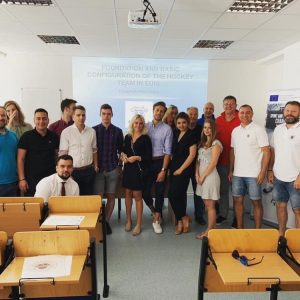 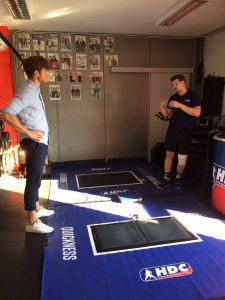 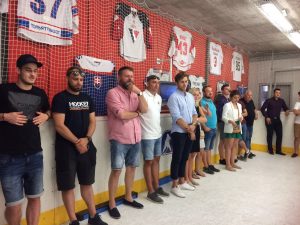