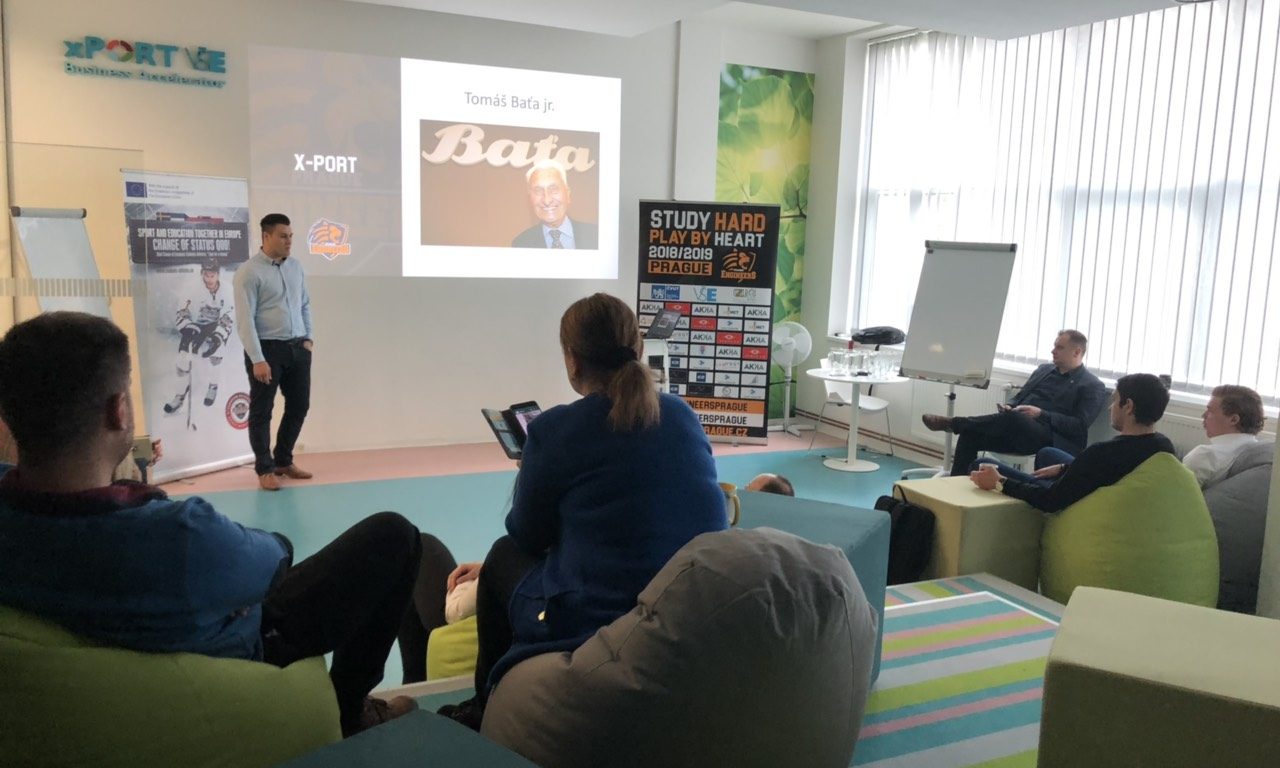 On May 12th and 13th, another Transnational Project Meeting of Erasmus+ Project happened. The Conference took place in capital city of Czech republic – Prague, hosted by the team Engineers Prague representing the Czech Technical University and University of Economics in Prague. Team Engineers Prague is organized in European University Hockey Association.

The main goal of this meeting was to develop dual career opportunities in Europe, participants were from Czech republic, Slovakia, Poland, Sweden and Estonia. On examples from members of two teams organized in European University Hockey League (EUHL) the lecturers wanted to show the good case practices about how to improve building dual career opportunities on universities and also share the ideas thru discussion. This part of conference was focused of showing examples of good governance and relationship between student-athletes and universities, from many perspectives.

Before the Prague part of conference, all the participants were invited to event - friendly hockey game between Engineers Prague and HC Ekonom, another university club representing the opportunity to play hockey on university in Prague. The most important in this even was to show and explain to all partners students, fans what are the benefits of student-athletes and what is the dual career about. During our discussion we were distributing brochure and manual about this unique topics what we were missing in past.

Lecture part took place in the office of Xport VŠE, which is a entrepreneurial incubator for selected projects from students of University of Economics in Prague. In this really inspirational space, first speaker was Tomáš Hlaváč, founder and vice-president of Engineers Prague and also graduate of University of Economics. He welcomed all the participants and introduced to them the space of Xport. He also introduced all three universities, who are Engineers Prague representing – Czech Technical University (ČVUT), University of Economics (VŠE) and University of Life Sciences in Prague (ČZU). These three universities are three from 5 public universities in Prague, with around 50 000 students combined. Tomas also spoke about communication with universities and how is university sport connected into study programs and its own university sport institutions. That took the participants little bit to history and to know the roots and actual position of university sport on Czech universities. Next part of his speech was about what are the possibilities for students to do a dual career programme and what are the main goals the programme should focus on. Since the dual career for student-athletes is not developer on the way it deserves, the main focus should be on dissemination of dual career for students, athletes, letting people know that there is this possibility.

Tomas then presented the agenda for next hours and also the main topics, followed by first discussion part. 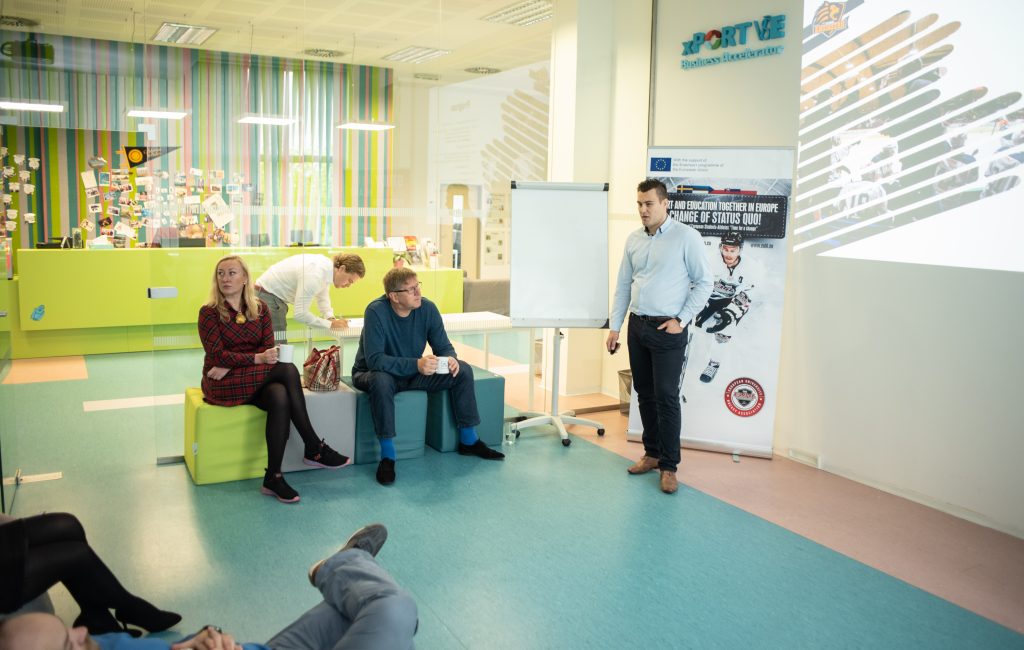 Following speaker was Marek Herna, also one of the founders of Engineers club and member of its marketing team department. His part started with introduction of Engineers vision, which are they following from the beginning. He mentioned, that from the start of the club they are keeping on their minds, that they are students club on the first place and hockey is just some kind of tool and opportunity to gather student-athletes and other volunteers, who want to develop their skills in many ways as players, managers or particular skills on other positions which are helping to develop the club.

He then reminded, that when you want to attract perspective student-athletes to your programme, you have to offer appropriate conditions, so they can put university sport prior to other professional or semi-professional leagues. Engineers have 4 training per week, on ice and also off ice sessions, own locker room in stadium not far from center of Prague. Important is that players get some equipment free or that during the gamedays they can get signed form excusing them from lectures at school, which is accepted from the side of lecturers without any problem.

Marek was also talking about how Engineers see their position as student´s hockey club in between the students, universities and public sector. From Engineers perspective of view on club activities, they are trying to be partners for all three mentioned parts of triangle – partners for universities and student clubs, where students can develop their skills, and also try to connect students with companies from private sector. And on the other hand be the ones who are bringing the companies to universities, because of searching for new talented perspectives. Marek Ended his part talking about how important is to build the community around the team from beginning. 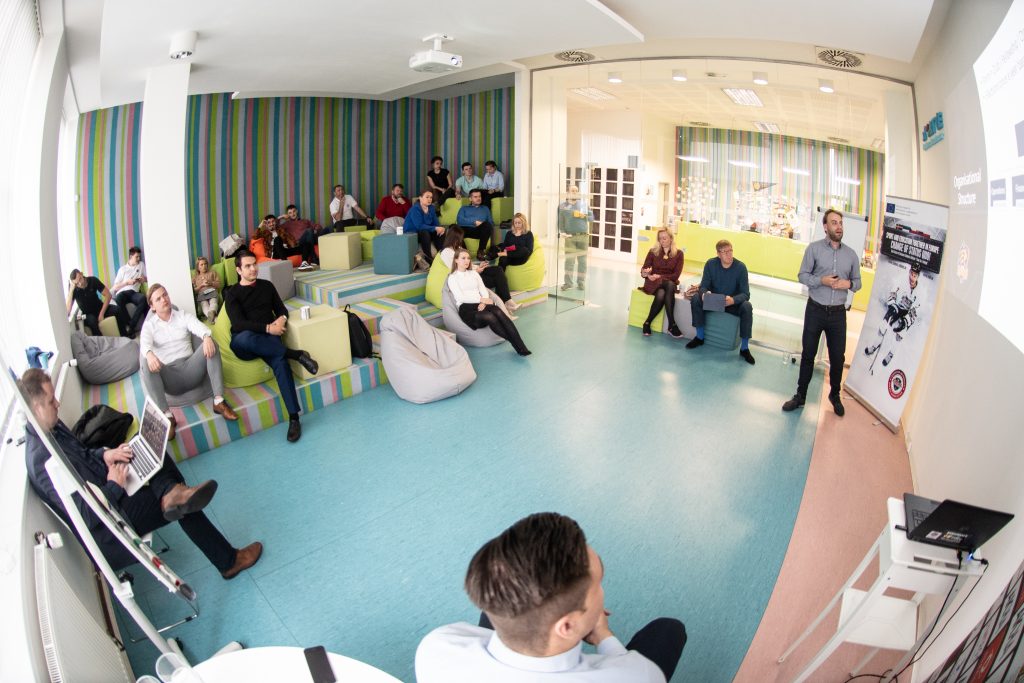 As a third speaker there was Marek Klement, Engineer´s marketing manager, who introduced the structure of the team and its management. Marek showed how Engineers developed their management model, how they found the volunteers to help and how the management is evaluating the ones who are contributing. He also showed the moments and results from last season, which was presented to club partners on Engineers Gala evening this month.

After his part, Tomas made a quick wrap up and started a discussions about the points the speakers talked about. Engineer´s relationships with universities and their partners are on very high level, so the discussion was mainly about tips and tools how to start the way to be successful in this as well. Discussion was followed by networking part in one of the Czech restaurant in the downtown of Prague. 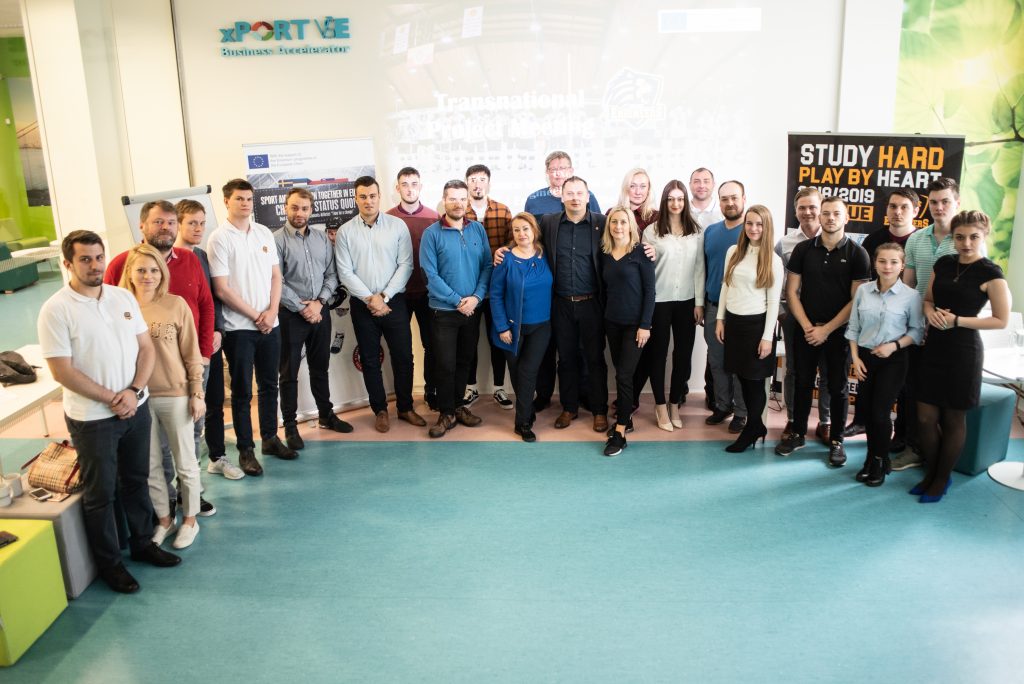 The second part of the conference took part on Monday June 13th, in the main building of University of Economics in Prague. Participants were divided into discussion tables and the main topics were:

After writing down all the ideas in round tables part, members of each team presented their outcomes and next steps to take in their specific positions. The mentioned points were different based on which position of building a club were the participants.

Participants came up with various answers. The situation really differs from team to team. Czech and Slovak teams are well supported by university, which is thanks to long history of sport classes on universities and these projects are the ones who are taking it to another level, its not just a PE class, now the teams truly represent the university. So in the case when teams are starting, they should start communicate with university intuitions involved in sport classes at first and take baby steps to build this relationship, try to present the vision and show the good practices they know.

Main question is how involved the university should be. Based on practice, there should definetly be 100% transparent communication. If we take it from the point where the clubs are on start, university is potentially the biggest partner in first year. We are not talking about financing, but universities are institutions with positive reputations and its definitely better to have the support from beginning. Try to find some lecturer or member of university management, who can be the teams warrantor. On the level when all this above is working, the clubs should try to involve as much student-athletes as they can into management and maintenance of the team. That’s where they can gain some experience, which they can use at school, use the project for schoolwork and learn how to manage the project. This is where all the participants see the possibility where student-athletes can learn and do sports at the same time

About the role of the team, it should propose adequate possibility for students to do sports on high level, so they can put dual career before activities in semi or professional leagues. This was mentioned above in the part about number of practices and team conditions. Teams should give to student-athletes all the information about how the team work and offer the possibility to be part of club management or to participate in some way on club activities. There is many thing to do in a way of running the club and students can try activities and soft skills in many ways. What is really important, in this way team can offer these positions also to non-athletes students. This should be one of priorities for the team in the beginning. Another part which could be done, is to find a way to connect teams activities into syllabuses and lectures. The best way where to start are seminar projects and presentations.

The day finished with a networking lunch on the University of Economics in Prague and wrap up from the hosting team members. Thanks to everybody who participated and assisted to make this useful meeting happen. 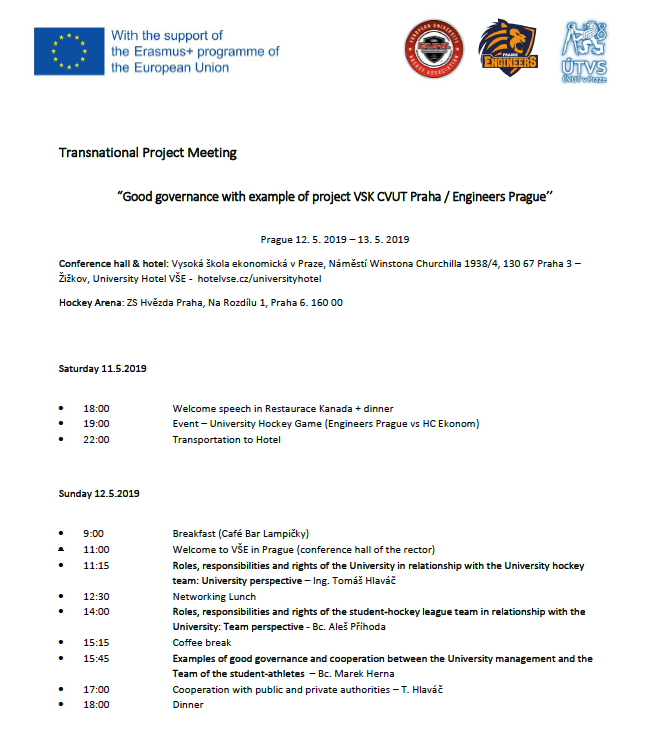 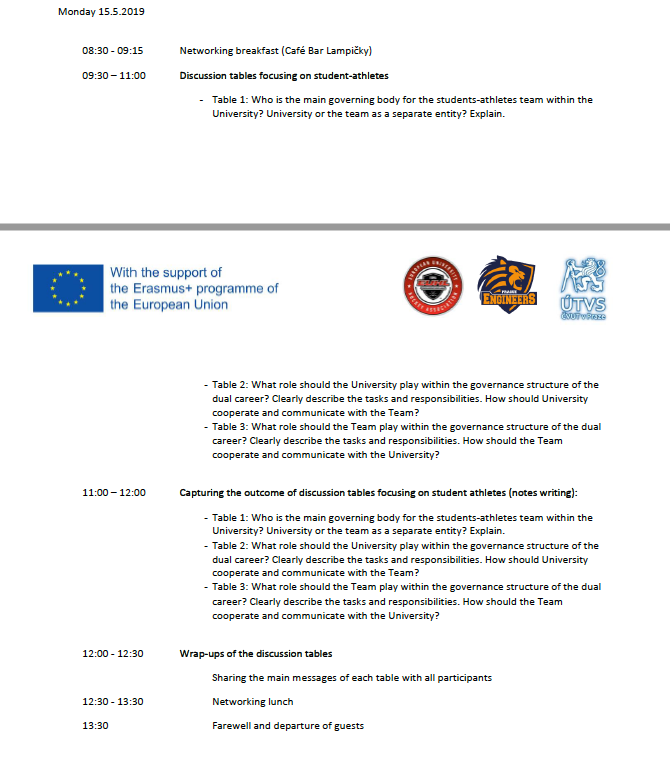